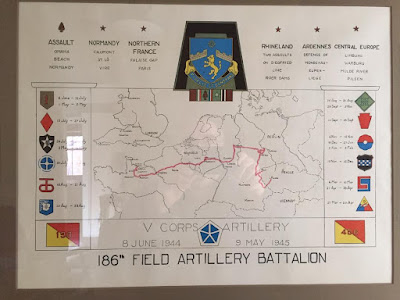 Today is the 75th anniversary of the beginning of one of the most decisive battles  of the Second World War — the Battle of the Bulge, Germany's last desperate effort to turn the tide of the war which by then Germany seemed certain to lose. Early in the morning on December 16, 1944, over 200,000 German soldiers unexpectedly broke through the dense Ardennes forest of Belgium and Luxembourg, deeply penetrating the Allied front line. Fighting with the 186th Field Artillery Battalion, my father was one of the many GIs caught up in what has been come to be considered “the worst Christmas for American soldiers since Valley Forge” [cf. Stanley Weintraub, 11 Days in December: Christmas at the Bulge, 1944].

The above photo shows a map my father made of his service on the European continent between June 8, 1944 ("D Day +2"), and May 9, 1945 (two days after the German surrender in the West). My father was very proud of his service in the war, but he seldom spoke about it in any great detail. Most of my uncles were war veterans too. Like my father, they were proud of their service, but seldom spoke of it in generalities. So one result was that I knew there had been a Battle of the Bulge, but I had little appreciation of its decisive significance until much later in life.

Of course, ever since Richard Nixon ended the Draft, few Americans actually serve in the military, which means fewer fight our wars, which means the public interest in those wars is much less than it was in our great 20th-century conflicts, from World War I to Vietnam. (Compare the interest in The Pentagon Papers with the relative lack of interest in The Afghanistan Papers. Perhaps we all need to review and reflect upon the traditional concerns in political theory about the different impacts of professions versus citizen armies.)

The Battle of the Bulge was very important, although Hitler's last offensive effort was inevitably doomed to failure in the long-term. It shows how even when the eventual outcome is virtually certain there is still the danger of short-term difficulties and defeats along the way, and no victory should ever be presumed, because no victory every comes easily.