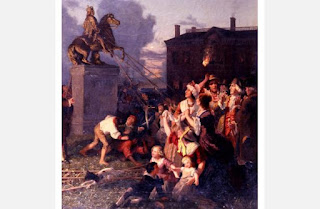 On July 9, 1776, fresh from hearing the Second Continent Congress's Declaration of Independence a New York mob pulled down the gilded lead statue of King George III at Bowling Green, an event immortalized by mid-19th-century artist Johannes Oertel in his oil painting Pulling Down the Statue of King George III (photo), now in the NY Historical Society Museum. (Although some parts of the statue were eventually salvaged, much of it became bullets for the Revolutionary cause.)

The statue of King George III had stood in New York only since 1770. Most of the statues whose future is being debated these days (or which have actually been toppled in some cases) are considerably older.  In the spirit of the ancient Roman practice of Damnatio Memoriae, renewed efforts are being made to erase if not all memory then at least all trace of public honor of historical figures who, often for very good reasons, are no longer deemed deserving of such honor.

Recent history has abundant examples of re-enactments of what happened to the statue of New York's last king. Most of us can remember vividly the pulling down of the statue of Sadaam Hussein in Baghdad on April 9, 2003. Earlier, the collapse of communism in the Soviet Union and its former "satellites" led to all sorts of monuments being removed.

Statues and other such monuments may memorialize history, but they are also always political expressions. As political values change over time, so do those that society chooses to remember and memorialize. Of course, some historical figures enjoy surprising staying power - long after the demise of the regimes they represent. People still bring flowers to the statue of Julius Caesar on Rome's Via dei Fori Imperiali, although the empire his conquests helped create is long gone, and few are those who pine for its restoration or wish to be governed by a Caesar today. Sometimes statues survive because they acquire a contemporary symbolism above and beyond the historical figure they portray. Rome's monumental statue of King Vittorio Emmanuele II is much more impressive than that of Caesar, although the historical person portrayed was obviously much less so, and his dynasty was evicted from Rome a mere 35 years after his statue was erected. It survives, however, as a historical commemoration to the 19th-century unification of Italy and as a symbol of commitment to secular modernity. (Of course, one can question or even oppose secular modernity, but the presence of that monument forcefully challenges anyone who does so to recognize secular modernity's historical power and continued appeal.)

But what is to be done when a society wants to reject outright what a monument or statue symbolizes? In the United States, we have the unique problem of statues and military bases which honor traitors who fought against the United States in the American Civil War, memorials erected for the most part much later as symbols of resistance against racial integration and civil rights for African-Americans. These doubly hateful objects obviously should never have been permitted to be erected in the first place and have no legitimate purpose now. This is  especially true of the statues of such Confederates in places of honor in, of all places, the U.S. Capitol!

Inevitably, however, there will be other monuments and statues, which will become controversial as society's values evolve. There is no easy or obvious answer to many of the dilemmas such situations raise. Like the Roman statues of Julius Caesar and Vittorio Emmanuele II, such monuments remember historical figures whose actual accomplishments - however problematic - certainly need to be remembered. Even more importantly, they may have acquired additional layers of historical and cultural meaning, which transcend the individuals portrayed and even the original context of the monument's erection. (The statue of Christopher Columbus at New York's Columbus Circle is as much about celebrating the Italian-American experience as it is about 1492.) So any decision to destroy or relocate a monument or statue is inevitably a complicated one, which can only be reached after an authentic process of deliberation and debate and some sort of societal consensus.  Had there been such a process in New York in 1776, would George III still be honored in Bowling Green? I doubt it. On the other hand, we might still be able to see his statue somewhere else, contextualized as part of a fuller national story, which faithfully remembers New York's 112 years as a British colony.

A society's history entails both continuity and change. More than two centuries after American independence, six states are still named after British monarchs. Such symbolic continuity expresses more fundamental social, political, and cultural continuities which continue to enrich us. That said, to live is to change. As our social, political, and cultural values have experienced constant revision, the memories we have highlighted and the way we have remembered them have changed as we have changed.

So too with the memories memorialized in our monuments, which (when not simply forgotten) may inspire us and affirm our values or may just as well challenge us to rethink our past and remember something different. Just as even churches have been renamed and rededicated in changing circumstances, there are times to rename a street, a town, or a fort, to erect a new monument or replace an old one, all the while remaining attentive to the power of historical memory to put our present moment in a larger perspective.
Posted by City Father