The Past, Present, and Unknown Future of Frequent Communion 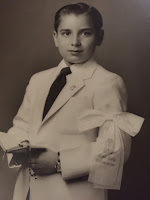 65 years ago today, I made my First Holy Communion (photo), preceded the day before by my First Confession. I have often recalled those momentous events of grace and joy in my young life, but our recent and current experience of the suspension of so much of our public sacramental life due to the present pandemic invites further reflection. Frequent Communion (and Confession) as we have known and experienced them in my lifetime have largely been historically unique, distinctly 20th-century phenomena, which have set the era which is now ending apart from most of previous Church history and so likely may not be a realistic guide to whatever it is that lies ahead.

When I made my First Confession and Communion in 1955, the Church seemed to be generally moving in an upward direction - up in numbers and up in its adherents' increasing intensity of observance. A lot had happened to contribute to this - not least the trauma of the Second World War. Here, however, I will focus solely on the changes in sacramental practice surrounding Confession and Communion.

It was Pope Saint Pius X (1835-1914, Pope 1903-1914) who is generally credited with making frequent Communion a 20th-century papal priority. Of course, it had always been deemed desirable, at least on some theoretical level, for the faithful to receive Communion frequently. Practice was clearly another thing, but the prayers of the old Roman liturgy clearly were written with more than just the celebrant's Communion in mind. Indeed, the Decree on Frequent Communion, issued under Pius X in 1905, was titled Sacra Tridentina, because it began by citing the Council of Trent's expressed desire that all present at each Mass should communicate sacramentally (Session 22, "On the Sacrifice of the Mass," chapter 6). Common practice, however, was, as I said, quite another thing. This was what Saint Pius X sought to correct. And, over the course of the 20th century, the movement he fostered largely succeeded.

So, by the time I made my First Communion, 50 years after Sacra Tridentina, we were more or less being socialized in Catholic school to receive as often as possible. Of course, one had to be in the state of grace (hence the increase in confessions in the mid-20th-century), and one had to be fasting (hence the mitigations in the fasting laws, first to facilitate afternoon and evening Masses in 1953 and then universally in 1957). And, of course, there were those occasions, such as funerals when Communion was by custom still simply not distributed. And I can remember attending weddings in the late 1950s, when I could legally have gone to Communion (since more than three hours had passed since I had eaten breakfast), but did not do so, nor did anyone else do so who was not in the wedding party.

By the 1960s, more and more people were going to Communion more and more often. Also Communion was increasingly being given at the proper time in the Mass - instead of before or after or (as was widely the case where there were numerous priests on hand to help) while Mass itself was going on, beginning usually right after the Consecration. More and more, Communion came to be seen as the normal thing to do at Mass. Meanwhile, the post-conciliar drop in Mass attendance left still coming to Church those more committed and so more disposed to frequent Communion, while the equally unanticipated drop in confessions corresponded to a change in attitude about what constituted an obstacle to worthy communion. (Meanwhile, it may have been forgotten that in explicating what represented a "right intention" for receiving Communion frequently, Sacra Tridentina had explicitly ruled out "routine.")

The increase in confessions earlier in the century had obviously been a by-product of all those Communions. It seems highly unlikely that people suddenly started sinning substantially more in the 20th century. But confession had become the thing which one was expected to do in order to receive Communion. So when, all of a sudden, people started receiving Communion so much more frequently, then they  evidently expected to go to confession more frequently too. Then, after frequent Communion had become the norm, even routine, an alternate mindset developed about sin and confession, so that, by the end of the century, confessions were, once again, a much rarer part of the average Catholic's practice, even though the thing that had increased confessions earlier in the century - frequent Communion - continued.

Saint Pius X and those who followed him on the Frequent Communion bandwagon were acting out of the best of intentions. And, by the standards of, say, 1960, they had succeeded. But then, when unexpectedly everything changed later in that decade, more or less all that was left of the pre-conciliar religious revival was routine Communion. It is that latter expectation that has survived into the 21st century, at least in those places where priests and Masses remain sufficiently abundant to allow for it. In much of the rest of the world, of course, Communion is rare because of the increasing insufficiency of priests and Masses.

Then came the Great Pandemic of 2020 and the suspension of so much of the Church's public sacramental life, precisely in those places privileged enough until now to enjoy a relative abundance of priests and Masses, thus creating a brief but important moment of eucharistic equality around the globe.

Now, once again, in many parishes more and more Masses are again being celebrated with congregations present in person and not just via the internet. While there may be many aspects of personal attendance that are attracting people back to church after this hiatus, one of them clearly is the opportunity to receive Communion. In fact, some returnees have explicitly expressed the view that it is being able to receive Communion again that attracts them to return. Given the importance which frequent Communion acquired in the 20th century, this seems utterly unsurprising. But it also highlights once again the discontinuity between the 20th century Catholic experience of frequent Communion and that of previous centuries, not to mention the present discontinuities between different parts of the Catholic world.

A somewhat different perspective was expressed by Dr. Anthony Fauci in a May 26 interview with America about what to consider when reopening churches for congregational worship. Speaking of Holy Communion, he said, "I think for the time being you just gotta forestall that." While Fauci himself is surely old enough to remember when many attended Mass without going to Communion, I suspect that for many of his hearers, formed in the 20th century spirituality of routine Communion, the idea must seem somewhat strange.

But the present pandemic probably has accelerated the process by which if not everything then at least many things that we have gotten accustomed to taking for granted in the 20th century will be very different in the 21st. And that will certainly include how we go to church and what may be or not be routine.