How Far We Must Yet Go 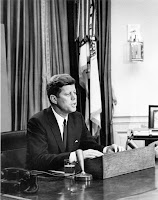 On this date in 1963, President John F. Kennedy gave an Oval Office Address (photo), known as the Report to the American People on Civil Rights. Timed to coincide with the integration by federal officials of the University of Alabama, Kennedy's speech proposed new legislation which would eventually become the landmark Civil Rights Act of 1964. Kennedy was a Cold War president, primarily focused on foreign not domestic policy, pressured by circumstances - the growing visibility and rising militancy of the Civil Rights movement - to respond. But, when he responded, Kennedy rose to the occasion on an issue which he acknowledged "is as old as the scriptures and is as clear as the American Constitution."

Watching Kennedy's address that evening, as an unsophisticated high school student in a parochial corner of the Bronx, I never imagined that 57 years later our country would continue to be challenged by the same unresolved moral and legal issue. I could foresee neither the genuine social progress that lay ahead in so many areas of our national life, nor the stubborn persistence of our country's foundational racial divide. As Boston's Cardinal Archbishop Sean O'Malley recently wrote, recalling his early years of priesthood in Washington, DC, "to know that fifty years later four police officers would see themselves entitled to murder a black man with impunity makes clear how far we must yet go to achieve racial equality."

The current crisis has highlighted not only the long-standing sin of racism but the (not unrelated) social and political problem of over-policing and the militarization of our police, such that instead of functioning as community peacekeepers, police increasingly appear and act more like occupying foreign armies. Indeed, as Matt Ford recently wrote in The New Republic ("The Police Were a Mistake: Law enforcement agencies have become the standing armies that the Founders feared"), American police have increasingly come to resemble the very standing army that the Founders with rare unanimity (and the Constitution they composed) so strongly opposed..

Hence the urgency of the (perhaps poorly named) "Defund" movement, which aims (depending on who is using the term and how)  to reallocate to more productive purposes resources presently poured into the militarization of police equipment, tactics, and training, to reform overly militarized police practices, possibly returning to more traditional relationships with local communities, to reappraise "qualified immunity," and maybe even to restructure local police forces the way Camden successfully did a few years back. The list of needed reforms is long, and enacting even some of them might significantly improve matters. But one thing that most obviously has to change is the relatively recently cultivated image of police as a military force occupying alien territory. (Former NYC Mayor Micheal Bloomberg boasted back in 2011 that he had his "own army in the NYPD, which is the seventh biggest army in the world.")
Posted by City Father