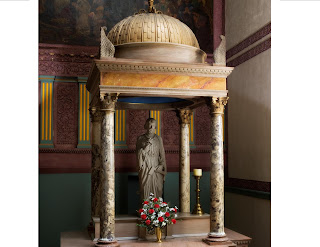 From pre-Christian springtime fertility festival to the day designated by the Second International for its Marxist-themed workers' holiday, May Day has been all things to all people. In 1955, Pope Pius XII tried to compete with the Communist workers' holiday by establishing a new liturgical feast of Saint Joseph the Worker (Sanctus Joseph Opifex). While the new festival failed, obviously, to outperform the more popular May Day, in the process it did displace in the Catholic calendar another relatively modern feast, that of the Patronage of Saint Joseph, celebrated in the 19th century on the Third Sunday after Easter and in the 20th century on the Third Wednesday after Easter. Pius XII's ineffective innovation still survives - somewhat vestigially and not much noticed - in the contemporary calendar. That said, its annual occurrence in this Year of Saint Joseph offers another occasion to consider Saint Joseph's significance.

In 2005, the newly elected Pope Benedict XVI (whose own name was, of course, Joseph) made the best of what the calendar offered, somewhat counterfactually calling this observance in honor of Saint Joseph the Worker "a liturgical Memorial very dear to the Christian people." Recalling how it had been established "to highlight the importance of work and of the presence of Christ and his Church in the working world," he expressed his "hope that work will be available, especially for young people, and that working conditions may be ever more respectful of the dignity of the human person." Sixteen years later, after a world-wide economic recession, a pandemic, and other more prosaic efforts by global capitalism and the elites it enriches to diminish further the power of workers and all respect for the dignity of the human person, Pope Benedict's words seem as significant today as they were then. The approaching 130th anniversary of Pope Leo XIII's famous encyclical Rerum Novarum two weeks from today further highlights the need for new responses to these persistent problems which have particularly characterized the past 40 years.