What Would Karl Say? 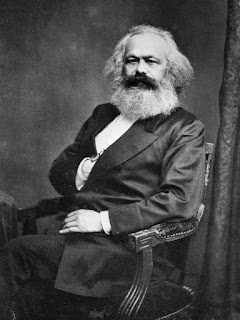 When I was in college and grad school in the late 1960s and early-mid1970s, Karl Marx, who would be 203 years old today, was all the rage - in particular, the writings and ideas of the so-called "Young" Marx - the Feuerbachian transformer of Hegeliansm and theorist of Entfremdung ("alienation"), popularized by "Frankfurt School" critical theorists like Theodore Adorno, Erich Fromm, Herbert Marcuse, and Jurgen Habermas. Simultaneously critical of both capitalism and of Leninist communism, and turned on by existentialism and Freudianism and whatever else seemed to fill in the gaps, my generation of students absorbed the vocabulary and some of the substance of the "Young" Marx's critique of society, starting with Ludwig Feuerbach's critique of religion.

Even then, however, the real-world prospects for any transformation of the world in any way that even remotely resembled Marxist categories appeared increasingly unlikely - and, if any thing, even less so after the collapse of the pseudo-Marxist Soviet regime two decades later.

As my one-time mentor Sheldon Wolin wrote in 2004, Marx's "predictions of the inevitable collapse/overthrow of advanced capitalism by a successful working-class revolution seem a relic of nineteenth-century romanticism. Instead of a steady growth in proletarian power, let alone in revolutionary ardor, organized labor underwent a dramatic, seemingly irreversible decline during the latter half of the twentieth century, suggesting that it is the workers who have been defeated - but by a different revolution" [Politics and Vision, Princeton U. Pr., 2004, p. 407].

Back in my day, "old left" ideas about proletarian revolution were giving way to "new left" alternative "revolutionary" identities, much as traditional liberal and social democratic commitments to the working classes have since been replaced by the vagaries and superficialities of "woke" progressivism.

Yet Marxist language and categories continue to enjoy a remarkable shelf life. For me, what remains interesting and viable from the historical wreckage of Marxism is what was perhaps Marx's main observation and insight - his recognition and appreciation of capitalism as the ultimate global agent of modernity's destruction of all that preceded it.

As Ferris Jabr wrote in last Sunday's NY Times Magazine, "significantly elongating life without sustaining well-being is pointless" ["How Long Can We Live?"] Analogously, that is what global capitalism has done, it has radically improved human productive capacity, while radically altering and undermining the spiritual and moral dimensions of human life and the political character of society, thus preventing the political order from remedying the damage inflicted by capitalism on its citizens and (as we have more recently come to appreciate) upon our common home, the natural world. Thus, to quote Wolin again, Marx "set out to probe the question of why the state failed to promote that generality of shared advantages and burdens for its members which, according to Hegel, was the true mark of the political [p.412].

That probe remains the preeminent challenge for any post-capitalist political theory, as, analogously, the post-capitalist practical political challenge must be to rebuild a constituency to maximize rational political action and to minimize capitalist market mystification that disempowers citizens, as the governing political orthodoxies have been doing in American politics since 1980.