A Medieval Heroine and the Modern Nation 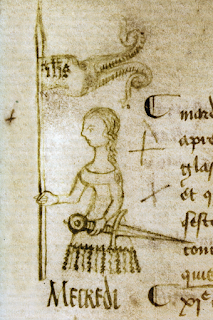 At his second inaugural, on March 4 1865, Abraham Lincoln famously said of the two opposing sides in the Civil War:  "Both read the same Bible and pray to the same God, and each invokes His aid against the other. ... That of neither has been answered fully. The Almighty has His own purposes." What Lincoln said of the American Civil War can presumably likewise be applied to most conflicts, in which each side believes (or at least hopes) God is on their side and will grant their prayers in preference to those of their enemies. In most actual conflicts, however, there is little obvious reason to suppose that the advancement of one or the other side's political interests is also automatically God's will. More often than not in history, as Lincoln observed, the prayers of neither side get answered fully.

History, however, does suggest one apparent exception, one famous instance in which God did seem to favor one side in a war. That was when Saint Joan of Arc (c.1412-1431), whose feast day in the Church calendar is today, the 590th anniversary of her execution, responded to revelations she had received from various "voices" and led the French armies to important victories over the English during the Hundred Years' War and secured the coronation of King Charles VII. I know of no reason why God should have sided with the French over the English in that conflict. But, based on the fact of Joan's canonization in 1920, one must infer that he did.

The medieval France Joan fought and died for was barely a nation state in the modern sense, but she has nonetheless become a patron of the modern French nation state. That modern French nation state in the last century and a half has lost one and then won two wars against Germany, which in the modern era had long since replaced England as France's natural enemy. Now, of course, instead of another actual state the greater threat to French nationhood may be the bureaucratic anti-democratic globalism represented, for example, by the European Union, whose spirit has shifted, as Massimo Faggioli has noted, "away from its origins, which were inspired in part by Catholic social teaching, and toward the technocracy of the neoliberal age" (The Liminal Papacy of Pope Francis: Moving toward Global Catholicity, Orbis, 2021, p. 25).

Ultimately, the problem with invoking Saint Joan today against any real or imagined national enemies, as some may seek to do, resides in the reality of those same "Voices" that inspired her. Without her supernatural inspiration, even a nation becomes just one more temporary political cause. It may be good. It may be bad. It may, more likely, be some mixture of both. But it will always be temporary.

(Photo: Drawing of Joan of Arc by Clément de Fauquembergue, dated 10 May 1429. This is the only known contemporary representation of Joan, although the artist never actually saw her.)