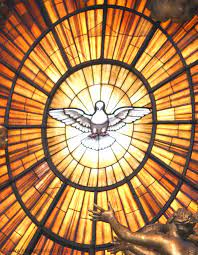 Traditionally, the post-paschal liturgical season that went from Trinity Sunday through the Saturday before Advent was called the "Time after Pentecost." According to the lay person's Missal which I used growing up, the Church during this season (which could cover a full half of the year) "urges her children to be more docile to the promptings of the Holy Spirit who desires to live in us and animate us with divine love, so that we grow in virtue and become ever more like the Holy One of God, our Lord Jesus Christ." This reflected the then prevailing understanding of the liturgical year, the first half of which recalled Christ's incarnation, public life, death, and resurrection, culminating in the giving of the Holy Spirit, followed by the second half of the year which recalled Christ's continued presence in his Church through the ongoing action of his Holy Spirit.

That liturgical tradition, which kept the connection between Pentecost and what we now uninspiringly call "Ordinary Time," highlighted the close bond between the Holy Spirit and the present life of the Church, which has been constituted as Christ's Body by his communication of his Spirit (cf. Vatican II, Lumen Gentium, 7 and 14). In the 19th-century language of continuous incarnation, Isaac Hecker (1819-1888) wrote "the Incarnation involves Christ's indwelling presence in His Church acting upon man and society through her agency until the consummation of the world" (The Church and the Age, p. 256). Since Pentecost, it is the Holy Spirit, who has continued Christ's presence and action in the world through the Church. This time of the Holy Spirit thus continues the time of Christ in the experience of his Church. This is what we ritualize in this second half of the liturgical year - the long present between Pentecost and the end, for which all that was recalled in the first half of the year has prepared us.

The "Time after Pentecost" is both the ongoing present time of the Church - the long present between Pentecost and the end - and an annual occurrence that punctuates our otherwise ordinary and seemingly spiritless lives. This year, the annual recurrence of this "Time after Pentecost" corresponds (in the United States, at least) to an unprecedented (in our lifetimes) "Time after Pandemic." In this time of emergence from the covid-19 pandemic and our unprecedented response to it, the Church's perennial post-Pentecost challenge to continue Christ's life and work in the world, renewing the face of the earth through the presence and action of the Holy Spirit, somehow must be experienced again in a world in which the Church has seemed somewhat absent. In fact, the Church had already become increasingly absent from more and more of the world for quite some time, but the pandemic - by literally closing the churches and absenting from its sanctuaries the faithful that still remained - has accelerated that problematic process, with long-term consequences that remain yet to be understood. Meanwhile, this experience has made all the unfortunate trends that ought to have been obvious before seem increasingly obvious now.

Of course, the Spirit blows where he will [cf. John 3:8]. So we must not set human limits on God's grace and providence. We do not yet know the full impact of the pandemic on the Church. Still, as we emerge from hiding, there are some things we do know and some steps we can take - and some self-inflicted damage we need not do. For example, in his first apologetical book, Questions of the Soul (1855), Servant of God Isaac Hecker pointedly opposed speaking to the world "in a sour, crabbed, and angry spirit." Sadly so much of what is now associated with contemporary Christianity in the United States sometimes sounds "sour, crabbed, and angry" - increasingly so, as the saving and healing breath of the Holy Spirit seems more obscured than revealed by so many factors of our own making, among them exclusionary ideological and political posturing presenting itself as devotion to religious fidelity and religious freedom.

(Photo: Dove of the Holy Spirit, Baroque oval stained glass window above Saint Peter's Chair "cathedra"  over the Altar of the Chair in the apse of Saint Peter's Basilica.)