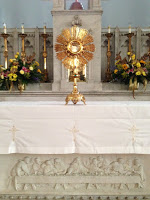 The acrimonious argument at the USCCB's June meeting last week about a possible teaching document on the Eucharist has made it into the mainstream media, with the inevitable result that from now on anything and everything that is said about worthy reception of the Eucharist will likely be filtered for most people by their partisan political allegiances, which is increasingly how religion is perceived anyway in the U.S.

This specific situation is complicated by the fact that there are actually two overlapping conversations taking place in the American Catholic Church at present. This first represents a religious response to recent research that at least appeared to show shockingly serious deficiencies in many American Catholics' understanding about what the Eucharist is. Perhaps, this should hardly have come as a surprise. For decades now, traditional practices which highlighted the unique sacredness of the Eucharist for previous generations (e.g., fasting before Communion, frequent Confession, kneeling for Communion, receiving on the tongue, reverential silence in church, etc.) have all been in decline, with inevitably obvious consequences for how the Eucharist has actually been experienced by many, regardless of whatever they may have been formally taught (if in fact they have been taught). In any case, whatever the cause, addressing this concern is certainly legitimate. It is a conversation which probably needs to occur. How it occurs, however, will significantly impact its efficacy. Meanwhile, however, potentially undermining the efficacy of the first conversation, there is now a second conversation, unfortunately overlapping with the first, which will almost certainly completely overwhelm the first one in the public's perception.

The second conversation is less a religious conversation, however, than it is a political one about restricting the reception of Communion on the basis of the recipient's political allegiances. Whatever else one may say, either way, on this subject, (and there is indeed much that could well be said on both sides of this argument), it is mind-boggling to imagine that, in today's United States, making support for a particular political strategy a prerequisite for receiving Communion could somehow promote greater reverence for the Eucharist or foster a more doctrinally correct conception of the Real Presence or even increase regular Mass attendance. In any case, of course, the USCCB has no actual jurisdiction in that matter. Only a local bishop can make a determination to deny access to the sacraments to someone in his diocese, and in this area diocesan bishops already possess authority and so do not need the USCCB to get involved.

As with misunderstandings about the nature of the Eucharist, any alleged non-adherence to any authentic doctrine by public persons is indeed a properly religious issue on which the Bishops may well have reason to make pronouncements. But is this a matter of widespread non-adherence to actual doctrine? Has the President, for example, ever actually formally dissented from the Church's doctrinal teaching? Or is it a disagreement about politics? More broadly, is it a practical disagreement about how to be Church in a modern democratic and pluralistic (hence, secular) society - a question of judgment and about how best to practice the traditionally preeminent political virtue of prudence?

The underlying fundamental political question of a somewhat traditional integralist vs. a modern democratic and pluralist approach to contemporary political life seems less obviously a question of religious doctrine and more in the realm of what has traditionally been viewed as prudential political judgment.

In the 20th century, the Catholic Church seemed to have left traditional throne-and-altar, sacral society integralism behind and attempted to make at least a limited peace with modern democracy and pluralism. Evidently, however, whatever the consensus supporting that turn may have been 50 years ago, it now appears to have been significantly less widespread than may have been thought then. Objectively speaking, there would appear to be coherent intellectual and moral arguments that could be advanced (and have been) on behalf of both approaches. Coherent arguments can clearly be advanced for integralism (not least its prevalence in earlier tradition). There are also, however, comparably coherent arguments that can be advanced in support of contemporary attempts at limited reconciliation with the modern world (not least the empirical evidence of the catastrophic failures of 20th-century integralist experiments, for example, in Ireland and Spain). But any such reconciliation with the modern world, however partial and limited, would have to recognize the changed (i.e., secular) character of contemporary political life. As some 60 members of the US House of Representatives recently stated: "no political party is perfectly in accord with all aspects of Church doctrine. This fact speaks to the secular nature of American democracy, not the devotion of our democratically elected leaders."

That both contrasting approaches articulate important priorities and values for the Church ought also to be acknowledged. A serene dialogue (as one would say in Church speak) is certainly called for between these two alternative ways of imagining the practical relationships between the Church and modern pluralistic societies and modern democratic (or at least constitutional) states. There is, however, a big difference between such serene dialogue and an acrimonious politically framed factional argument. Hence the utility of Cardinal Ladaria's recommendation to the U.S. Bishops "to dialogue with other episcopal conferences as this policy is formulated in order to learn from one another and to preserve unity in the universal church." And, in any case, it seems at best counter-productive to conflate this issue with a perhaps very much needed strictly religious conversation about how the Church understands and experiences her sacramental life.

The seeming subordination of religion to politics is increasingly a society-wide challenge in the United States today. As conservative Christian pundit Peter Whener recently wrote in The New York Times: "the Christian faith has far too often become a weapon in the arsenal of those who worship at the altar of politics." But, as J.D. Greear, the President of the Southern Baptist Convention from 2018 to 2021 recently warned, “Anytime the church gets in bed with politics, the church gets pregnant, and the offspring does not look like our Father in heaven.”