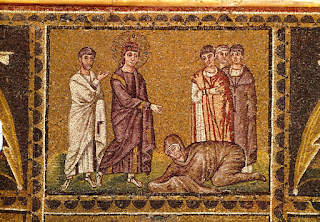 Having just lived through a global pandemic (which is sadly still by no means over in far too much of the world) and after more than a year of social distancing, sanitizing surfaces, and washing hands, we can all appreciate, in a somewhat heightened way, the ancient world’s anxieties about inexplicable illnesses and about direct physical contact with sick people. Ancient people knew nothing about viruses or even bacteria, but understood the dangers of close contact and touching. They had all sorts of anxieties about contact with blood - not because they understood the biology of blood-borne pathogens, but because they saw blood as the sacred repository of life, which, being sacred, was presumed to be dangerous, with all the dread and awe that typically surround the sacred in traditional societies. Perhaps that was itself an evolutionary response to help ward off certain contagions that they could not then otherwise understand.

In such a society, the plight of the woman afflicted with hemorrhages for 12 years, whom Jesus encountered in today's Sunday Gospel [Mark 5:25-35a], was much more than a merely medical condition. A whole set of social and religious restrictions would have been involved. Like covid, her illness had a public, social dimension. It rendered her ritually unclean, effectively excluding her from the community. Anyone she touched (or who touched her) would also automatically be unclean. Likewise whatever she touched or whatever touched her would have to be washed. Imagine what they would have done had they had all the hand sanitizers that we have become so addicted to in the past year! Considering how fearful we have all become of touching people and things, imagine how afraid the woman in the Gospel must have been of touching people – even accidentally! Imagine living like that for 12 years! Imagine what that would do to her sense of herself – and her relations with others! What happens to a person when the very way one is has been so strongly stigmatized, socially defined as evil?

Suddenly, into all this sadness and suffering, into this burdened world of separation and mutual avoidance, of anxiety and shame, Jesus, showed up. Jesus was, of course, already famous for his powerful acts of healing which also overcame separation and stigma - in the process revealing what kind of God our God really is, a God who, as the Book of Wisdom proclaims [Wisdom 1:13-15; 2:23-24] does not rejoice in the destruction of the living. As it says in the Catechism [1503]: Christ’s compassion toward the sick and his many healings of every kind of infirmity are a resplendent sign that “God has visited his people” and that the kingdom of God is close at hand.

Somehow, something about Jesus’ presence empowered the woman afflicted with hemorrhages for 12 years to risk taking a chance on Jesus. So, instead of maintaining the socially expected and legally prescribed social distance, she took advantage of the cover provided by the crowd and boldly touched Jesus’ cloak. And immediately her bold faith was rewarded. Immediately her flow of blood dried up. She felt in her body that she was freed of her affliction.

What the expensive medical establishment could not accomplish in 12 years, Jesus cured in an instant – and for free! And, in the process, Jesus set the sick woman free, not only from her illness, but from all its catastrophic social consequences and its oppressive emotional and psychological burdens.

Jesus, for his part, was aware at once that power had gone out from him.  after more than a year of social distancing, sanitizing surfaces, and washing hands, we can all appreciate, in a somewhat heightened way, what it means to touch - and to be touched by - one another, the natural human power touching possesses. How much more power, divine power, must have been when the woman touched Jesus?

The woman, we are told, approached in fear and trembling. But, instead of scolding her (as religious people sometimes seem so addicted to doing), Jesus recognized her as a Daughter of Israel, a member of God’s People. And, because she was a member of God’s People, she deserved to be included as a full member of the community. So Jesus would not permit her healing to remain secret and unnoticed. In that crowded scene, certainly her secretive, hidden touching of Jesus might have remained hidden, neither asked not told about – had it not been for Jesus’ insistence that everyone present should hear the whole truth.

In the 1980s Billy Joel sang: And isn’t that a kind of madness To be living by a code of silence When you’ve really got a lot to say.

Secrecy is seldom wholesome, seldom beneficial, seldom serves the larger interests of justice, equality, and inclusion. And so Jesus chose not to be an accomplice in the destructive dishonesty that is both the root and result of the secrecy that poisons so many human relationships and societies.

And so she fell down before Jesus and told him the whole truth. She said what needed to be said. And In response Jesus promised her liberation from her suffering and told her to “Go in peace.”

Jesus’ words were not meant to comfort just one woman who happened to have been afflicted with hemorrhages for 12 years and just happened one day to touch his clothes! Jesus’ words were and are equally addressed to all of us in the here and now - whatever hidden or not-so-hidden burdens we bear, whatever sad (or not so sad) secrets define us - to do as she did, to take the chance that she took, to tell the whole truth, and so experience ourselves the coming of God’s kingdom – a kingdom of healing and health, of honesty and inclusion, and so begin to become ourselves active agents of God’s kingdom of reconciliation and peace.