What Can the Church offer the World - and How? 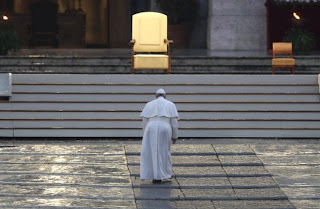 At this critical inflection point (to use that strange but suddenly fashionable expression) in the life of contemporary Christianity, Where Peter Is blogger Mike Lewis has offered an insightful and challenging, if somewhat unsettling, analysis of the Catholic Church's current and prospective capacity to offer a message to the contemporary world. Taking his cue from Pope Saint Paul VI's 1975 Exhortation (which Lewis mistakenly calls an "encyclical") Evangelii Nuntiandi and its reminder that the Church "exists in order to evangelize," Lewis' article "What Can We Offer To the World?" looks at the challenges for evangelization in contemporary contexts. Here in the West (which is the article's almost exclusive focus), "the evangelization challenge for the Church is to show that Catholicism is not an obsolete religion filled with superstitious bigots and conspiracy theorists. If we are unsuccessful, sharing the Gospel will be impossible."

In other cultural contexts, the challenges and consequences of failure are different. "In the developing world, the evangelization challenges are to inculturate the faith and to liberate the oppressed" with failure leading people "to seek God elsewhere." In those places where the Church is tiny and persecuted. "the challenge is to show these societies that Catholics can live in fraternity as neighbors despite differences in belief, and can help work toward the common good of all," with failure meaning "they will be crushed."

But, back here in the West, "if we fail to recognize how the Church is perceived by the wider society, our beloved faith will be reduced to little more than an afterthought by the prevailing culture in a generation or two." Lewis focuses primarily on what he believes is "a unique danger to the Church" presented by right-wing reactionary Catholic dissent, which he believes has increasingly become both anti-papal and has led "the embrace of dangerous ideologies, including forms of nationalism, populism, and integralism that are incompatible with the Catholic faith." Lewis ascribes the resulting "chaos" to "a rejection of the Living Magisterium" among Catholics, some of whom who have "unmoored themselves from the teaching authority and coherence that comes from unity with the pope and the bishops in communion with him," some of whom have succumbed "to the dangerous post-reality mindset typically associated with Protestant fundamentalism."

Lewis' concern is that many U.S. Church leaders seem somehow unaware of these problems and lacking in "understanding of the culture at large," and instead "seem to think fighting the same culture wars in the same way they've fought them since the 1990s and early 2000s is right where the US Church needs to be." Ultimately what this comes down to, for Lewis "is a crisis of credibility."

Of course, criticism of Church leaders, whether warranted or not, is increasingly common in our contemporary context - both inside and outside the Church community. What is interesting about Lewis' essay is what underlies that "crisis of credibility" that he is so concerned about. While Mass attendance and religious practice in general have historically been higher in the U.S. than in many other countries, it is also the case "that the number of Catholics who practice the faith and agree with the Church on social and moral issues is in steady decline." While indifference to traditional Church teachings on sexual morality is widespread throughout the West, in the U.S. "many conservative Catholics disregard the bishops' views on immigration, the death penalty, climate change, poverty, racism, healthcare, refugees, education, and most other teachings seen as 'liberal' in the contemporary American political ecosystem."

One especially important insight in Lewis' analysis is how he describes the relatively recent shift in Western societies from what Pope Benedict XVI once called "the dictatorship of relativism" to "a new set of moral doctrines in mainstream society." So, Catholic positions which were, not so long ago perhaps, "stereotyped as uptight, dogmatic, and old-fashioned" are now increasingly "viewed as immoral and oppressive." In this new situation, "being harsh, condemnatory, and dismissive contributes to the image of the Church as morally reprehensible, turning off potential converts," even causing some "to see the Catholic Church as a hate group." So, for example, whereas some in the Church have criticized what appears to be happening in the German Church as capitulation to the world, Lewis sees "a Church that is searching for something to say to a world that has given up on listening." (That said, he does acknowledge that some of what he has read from Germany comes across as to deferential and lacking "the degree of doctrinal assertiveness" to which he is accustomed.)

A key concept to be derived from this new reality may be a new need, even when one personally faithfully assents to Church teachings on today's controverted topics, to develop a capacity to "understand why many think the Church's official justifications are lacking." (Of course, while understanding one another may be more conducive to peaceful coexistence - to retrieve a useful phrase from the Cold War - there is also always the sad reality of irreconcilable intransigence on the part of some who will persist in advocating positions which, however understandable, can never be completely accommodated within the faith of the Church, despite all the dialogue in the world.)

As Lewis sees it, there are really just two choices: "we can retreat further into our collapsing fortresses ... and cling to a self-referential concept of the Church, or we can get in the boat with Peter, Pope Francis, and venture out into the wider world, riding on the choppy waves, seeking out a new future for the Church."

The strength of Lewis' analysis lies in its critical examination of our precarious situation in the West today and its recognition that something other than retreat into a sectarian sub-culture is called for by an authentic commitment to the Gospel. That said, it must also be recognized that the boat, which we may be being called to get into, is unlikely to dock anywhere remotely resembling the relatively safe harbor we have historically become accustomed to. There is no guarantee of success in even the most sincere openness to dialogue with the world. The defining contemporary challenge is to accept the inevitable loss of cultural and political power for what it is and then do what can be done to find in cultural and political marginalization renewed opportunities to offer something salvific to the world, empowered only by the fervent belief that what is offered is ultimately what is in fact needed.