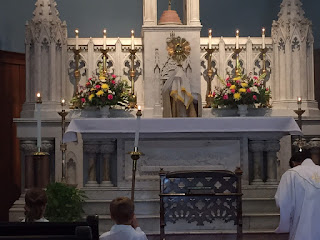 Corpus Christi
Exodus 24:3-8
Hebrews 9:11-15
Mark 14:12-16, 22-26
Nowadays, whenever the subject of the Holy Eucharist comes up, it is usually in the context of controversy and conflict - mask mandates at Mass, the pandemic-period prohibition of Communion on the tongue, partisan politics about so-called "eucharistic coherence," and the shocking 2019 Pew research results that have been interpreted as showing that many Catholics may not to be fully in step with the Church's true teaching on the Real Presence.
So let me start with something different - a happy memory. This past Friday was the anniversary of my First Holy Communion on June 4, 1955. Napoleon Bonaparte (1769-1821) - the Corsican soldier-politician who eventually turned himself into a French emperor and in 1804 compelled poor Pope Pius VII to come to Paris in person to watch Napoleon crown himself - that same Napoleon, who presumably enjoyed many successful and happy days in his adventurous life - once famously described his First Communion as the happiest day of his life.

I am not so sure I would completely echo Napoleon, but I would certainly agree that my First Communion was a very happy occasion. Of course, what many – maybe most – Catholics remember most about their First Communion Day is frequently the frills: the outfits, the photos, and, of course, the presents. Those are all perfectly nice things, and their significance should not be minimized. They mattered a lot to everyone around me and so also mattered to me. Yet – lover of ritual and ceremony that I already was becoming - what I actually remember most about my First Communion was all the hours we spent practicing beforehand. The Sisters were not about to leave anything to chance! (For us at the time, First Communion, along with First Confession the day before and Confirmation a couple of years later, were significant life-cycle celebrations, for which the parish school faithfully prepared us.) And I remember my mother having to persuade my Aunt to have her babysit for my 3-month old sister, so that both my parents and my grandmother could attend the ceremony. And then came the ceremony itself - an 8:00 a.m. Solemn High Mass! Actually, I remember very little about the ceremony itself. But I do remember how we walked up to the altar, two-by-two, and then how I returned to my pew with my hands held together very piously - something which my father found noteworthy enough to comment on later. Finally, I remember my mother’s dress as she approached the Communion rail right in front of me later on in the Mass. (In those days, when most adults still went to Communion only occasionally, First Communion was one of those rare events when one’s parents would typically go to Communion.)

As for the actual reception of Communion itself - kneeling on the altar step (rather than at the altar rail) to receive the Sacred Host on my tongue, as the priest prayed, Corpus Domini nostri, Jesu Christi custodiat anuman tuam in vitam aetaernam, Amen - that memory is real but much less vivid. Perhaps that is because it merges in memory with so many other subsequent  Communions. For many of us in my generation (brought up after Saint Pius X encouraged frequent Communion), that would have typically been once a week (and later in life for those of us who embraced a religious vocation, likely as often as once a day). That's a lot of Communions! So, if the first one merges in memory with all those subsequent Communions, that may be as it should be. As a pastor, I always used to stress when preaching to First Communicants on their big day, the key word to remember about the experience is “first” – the first time they are doing what (hopefully) they are going to be doing many more times, over and over again, at least once each week, all the rest of their lives.

Unlike Baptism, Confirmation, and Holy Orders, which are defining, once-for-all events, and despite the life-cycle significance of First Communion in contemporary Catholic culture, the Eucharist really is meant to be a regularly repeated sacrament. Of course, any sense of that was largely lost for so much of our history, when people went to Communion relatively rarely. At some level, that was always clearly contrary to the plain sense of the liturgy, and to the very nature of the sacrament. As Saint Thomas Aquinas himself explained centuries ago, by Baptism a person is oriented to the Eucharist, so that by virtue of being baptized one is destined for the Eucharist by the Church (Summa Theologica, III, q. 73, art. 3). On the other hand, it may well be that frequent Communion as it evolved in the last third of the 20th-century and since, may have now made the experience something more like a routine for far too many recipients. And that too may well be part of what is broadly, if imprecisely, reflected by that recent research about what many Catholics may or may not believe (or think they believe) regarding the Eucharist.

Today the Church celebrates the Most Holy Body and Blood of Christ, the feast commonly called Corpus Christi. The meaning and spirit of this festival is succinctly summarized in the familiar collect – so familiar because it is also the collect traditionally sung after the hymn at Benediction: O God, who in this wonderful Sacrament have left us a memorial of your Passion, grant us, we pray, so to revere the sacred mysteries of your Body and Blood that we always experience in ourselves the fruits of your redemption.
This prayer, one of the very few liturgical collects addressed directly to Christ rather than to God the Father, reminds us that the sacrament of the Eucharist is intimately connected with Jesus’ Passion, Death, and Resurrection.  Of course, the Mass of the Lord’s Supper on Holy Thursday, which recalls the institution of the Eucharist, certainly sets it within the fuller context of Jesus’ Passion, Death, and Resurrection; but there is so much else going on then that, over the centuries, it increasingly appeared appropriate to accent the Church’s joy in this wonderful sacrament on a day (and for centuries an entire octave) all its own. Hence, this feast – established by Pope Urban IV in 1264 with its Mass and Office specially composed for the occasion by the great 13th-century Dominican Doctor of the Church Saint Thomas Aquinas.
The prayer he composed calls on us to revere the sacred mysteries of Christ’s Body and Blood. Hence the special traditions of Eucharistic veneration associated with today – the traditional outdoor procession, for example, which elaborately marks this occasion in Catholic countries. As a seminarian in 1984, I had the privilege of witnessing the impressive outdoor Corpus Christi procession in Montreal’s Old City. In Germany, they have a tradition of the procession stopping at altars four erected along the way, at each of which is read the beginning of one of the four gospels before Benediction is given with the monstrance. It is a symbolic way of suggesting that the entire story can be summed up in some sense in the sacrament of the Eucharist.
But along with our veneration of this wonderful sacrament, the primary point is for us to experience its benefits. One particular ancient Roman prayer expresses this idea very eloquently in the Canon of the Mass:
In humble prayer we ask you, almighty God, command that these gifts be borne by the hands of your holy Angel to your altar on high in the sight of your divine majesty, so that all of us, who through this participation at the altar receive the most holy Body and Blood of your Son, may be filled with every heavenly grace and heavenly blessing.
In other words, by participating in the Eucharist and receiving Holy Communion, we, like Christ’s offering of himself, are also, as it were, carried along to the Lamb of God’s heavenly altar as a pledge of our future glory.
In the beautiful words of Saint Thomas Aquinas, which the Church recites this evening at Vespers: How holy this feast, in which Christ is our food; his Passion is recalled; grace fills our hearts, and we receive a pledge of the glory to come.
The current controversies and conflicts about Communion are not going to go away any time soon. They are part of the terrible time of polarized politics and politicized religion in which we are living and the toll all that has taken - on the unity of the human race, on our unity as a national community, and on our unity as the Body of Christ, which, speaking scholastically as Saint Thomas would have, is the res tantum of the Eucharist, the final end of the Eucharist, our unity in the Body of Christ.
But, for today, at least, let us rejoice in the sacramental sign of that ultimate reality, which Christ has given to the Church, not to divide us but to unite us forever with him.
(Photo: Benediction of the Most Blessed Sacrament, Immaculate Conception Church, Knoxville, TN)
Posted by City Father