The 2nd Day of Christmas 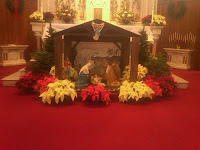 Back when the Christmas season really began on December 25, the 12 days from Christmas until Epiphany Eve really were "the 12 Days of Christmas." Today is, of course, the 2nd Day of Christmas. In the song, one's "true love" (God) is supposed to give one "two turtledoves" (representing the Old and the New Testaments) today. Mainly what we've gotten here in Knoxville today has been more snow, which has made this "tender Tennessee Christmas" the whitest Christmas in years.
In Canada, where I was for six happy years, the day after Christmas is called "Boxing Day," after the British fashion. In those Catholic countries where December 26 is still holiday, I presume it is known as "St. Stephen's Day," after St. Stephen, the first martyr, whose feast day it normally is. Since 1969, the Roman calendar has assigned the feast of the Holy Family (previously celebrated in January) to the Sunday between Christmas and January 1. So that is what the hardy worshippers who made it to Mass got to observe today.
It's a thoroughly modern, notional feast - dating back only to Pope Leo XIII's 1892 Apostolic Letter Neminem Fugit, which dedicated Christian families to the Holy Family. In an age when so many social institutions increasingly seem to be in disarray, there has been a corresponding impetus to uphold somehow the primordial institution of the family. Of course, the modern "nuclear family" (one father, one mother, and one or more children biologically belonging to that couple) is only one representation of the more complex and varied experience of "family" in human history, and even today may appear less and less typical in this age of divorced and "blended" families, single-parent families, unmarried straight couples (with or without children), gay couples (with or without children), etc.
For most of human history, the family unit (whether "nuclear" or "extended") has served as the fundamental social institution through which society institutionalizes its commitment to the next generation - an important value for any community which hopes to have a future. In all the current noise about the form and structure of family life, that is a value no society can afford to lose sight of.
That said, of course, for Jesus - and, therefore, for the Church - the kingdom of God takes us beyond the immediate inter-generational social unit of the family and commits us to a larger community in which our new relationship with one another in Christ entwines us in a whole new network of relationships, necessarily wider and more inclusive than any family unit.
Situated at the heart of the Christmas season, the contemplation of the Holy Family fits easily into the family-centered sentiments that are so much a part of our contemporary Christmas. But it also invites us to consider the great theme of the incarnation, what Christmas is ultimately all about, the divine Word becoming part of our fragile and (as today's gospel illustrates) frightening world as one of us. Born into a human family, with a mother and an adoptive father, Jesus highlights for us the significance of the ordinary, day-to-day networks of relationships of which we are a part - and must be part of if we are to survice in our world. It is within families of all shapes and sizes, as well as other sorts of relational networks revolving around work, neighborhood, nation, etc., that we must live now so as to become who we will be in eternity.
Posted by City Father