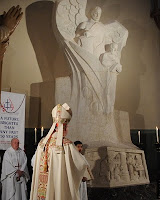 Today is the 122nd anniversary of the death of Paulist Founder, Servant of God Isaac Hecker, who died at the Paulist Mother Church in New York City on saturday, December 22, 1888.
In his eulogy at Hecker’s funeral four days later, the Jesuit Provincial recounted the scene at Hecker's deathbed, when his fellow Paulists asked for his final blessing: Hecker "roused himself from the depth of pain and exhaustion, and his ashen lips which death was sealing pronounced the singular words … 'I will give it in the shadow of death.' His feeble hands were raised, and like a soldier dying on the field of battle he reconsecrated his followers in the name of the Father, Son, and Holy Ghost for the struggle in which they had chosen him as Leader."

I've always liked that account of Hecker's final blessing. As a Paulist, I feel included in that blessing and so have reason today to be especially grateful for the holy life and heroic ministry of Isaac Hecker. For much of the first 25 years of his life, Hecker had been what today might be called "spiritual but not religious." He was a spiritual seeker, searching for God in the various competing paths available in 19th century American society. In 1844, he finally found what he had been looking for and entered his new spiritual home in the Roman Catholic Church. Having found the object of his spiritual search, Hecker, now no longer a seeker himself, devoted the rest of his life to helping others find what he had found in the Church.

In his later years, Hecker summed it all up in these words from a letter to a friend: "How does Father Hecker? In body? Not so well for several months, but now improving. In spirit? Living and working in the dawning light of an approaching, brighter, more glorious future for God's Holy Church. A future whose sun will first rise on this continent and spread its light over the world."
Posted by City Father