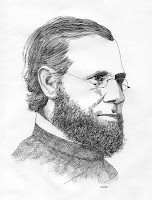 In his 1st book, Questions of the Soul, written in 1855, Isaac Hecker, the future founder of the Paulist Fathers, wrote: "If Christ is to be for us a savior, we must find him here, now, and where we are, in this age of ours also; otherwise he is no Christ, no Savior, no Immanuel, no ‘God with us’.”

I began my Saturday morning homily with those familiar words of Hecker's - fittingly enough since today's Gospel (which is also tomorrow's) includes Matthew's reference to Isaiah 7:14: "the virgin shall conceive, and bear a son, and they shall name him Emmanuel," a word which Matthew then translates as "God is with us." Hecker's words were especially appropriate this morning because, of course, today is the 191st anniversary of Hecker's birth on December 18, 1819.

Hecker's spiritual search as a young seeker was all about finding the God who is with us. Having found him in the Roman Cahtolic Church, Hecker devoted the rest of his active life to helping others like himself to find Emmanuel also. While still a Redemptorist misisonary, Hecker wrote two apologetical books, Questions of the Soul (1855) and Aspirations of Nature (1857). His purpose in writing them "was to explain the Catholic religion in such a manner as to reach and attract the minds of the non-Catholics of the American people."

In furtherance of that goal, Hecker eventually founded the Paulist Fathers in 1858. The evangleizing mission of the Paulist community was immediately incarnated in their first parish - St. Paul the Apostle in Manhattan. Shortly after the first church on the site was opened, the parish began its first Paulist mission - from December 18 to 25, 1859 - attende by 725 adults and 75 children. I think that today we would be thrilled to get anywhere near that many people to come to anything. For those first Paulists, acting out of an abundance of zeal, that probably seemed like just a good start!

Isaac Hecker died at the Paulist parish in New York on December 22, 1888. In the eulogy at his funeral, the Jesuit Provincial Superior described Hecker’s deathbed blessing of the Paulist community he had founded. “His feeble hands were raised, and like a soldier dying on the field of battle he reconsecrated his followers in the name of the Father, Son, and Holy Ghost for the struggle in which they had chosen him as Leader.”

Hecker's whole life was all about finding the God who is with us and helping others to do the same. Ultimately, that's what Christmas is all about and what the Christian life is all about in this interval between Christmas and the end.
Posted by City Father