The Tree on Summit Hill 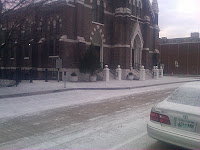 This morning, as snow is falling on Knoxville, our parish Christmas Tree stands in front of the Church – dark, but standing. Tomorrow, December 8, I will bless it and then the lights will be turned on. Given the church’s prominent location – at the summit of "Summit Hill" – an outdoor Christmas Tree seems like such an obvious thing to do. The flip side of being at the top of a hill, however, is the wind, which has already blown the tree down. But we got it up again, and have it anchored all that much more securely, so as (we hope) to guarantee that it won’t fall over again!

The city had its Christmas Parade this past Friday. But we are waiting until Wednesday to light our tree because, of course, December 8 is the solemnity of the Immaculate Conception of the Blessed Virgin Mary, the patronal feast of the United States and of this - the first - Catholic parish in Knoxville. The Immaculate Conception celebrates our belief - as an article of Catholic faith - that “the Most Blessed Virgin Mary, from the first moment of her conception, was, by the singular grace and privilege of Almighty God, in view of the merits of Christ Jesus the Savior of the human race, preserved immune from all stain of original sin” (Blessed Pope Pius IX, Ineffabilis Deus, 1854).

When the Church defines a truth as “revealed by God,” this does not suggest some new revelation but bears witness to what has been revealed from the beginning and has been transmitted over time through the tradition of the Church. In reference to the Immaculate Conception, scripture and Church tradition affirm that the grace of God filled Mary’s life from the beginning. In view of her vocation to be the mother of Christ, we recognize that Christ’s redeeming work was effective in Mary in the depths of her being and at her earliest beginnings.

Mary’s sinless conception prepared her for her special role in Christ’s coming into the world, and thus helped to prepare the world for that great event. This harmonizes especially well with the salient themes of the Advent season - preparing ourselves and the world for Christ’s return and disposing ourselves to recognize his presence among us here and now by contemplating his first coming into the world at Christmas.

On May 13, 1846, the 6th Provincial council of Baltimore, attended by 23 (out of 26) U.S. bishops, in the Council’s first decision requested the Holy See to name the Blessed Virgin Mary as patroness of the United States, under the title of the Immaculate Conception. On November 20, 1959, thousands of Catholics gathered with their bishops for the dedication of the National Shrine of the Immaculate Conception in Washington, D.C. Prominently located on the campus of The Catholic University of America, the National Shrine (now a Basilica) has become a major focus for pilgrimages for Americans from all over the United States, a vibrant testimony to our Catholic faith in this singular grace given, for our sake, to her whom, in consequence, we can constantly invoke as “Mary, full of grace.”

Meanwhile, here in East Tennessee in 1855, the first Catholic Church in Knoxville was erected on Summit Hill and dedicated to the Immaculate Conception. For 155 years, a Catholic Church has stood on this hill as a vivid sign of the Church’s outreach to all who live, work, or visit within sight of its tower. May our parish Christmas Tree, which will be lit in time for Wednesday evening’s festive Mass, be a beacon highlighting this parish's mission - the Church’s mission - to illuminate our world with Christmas grace.
Posted by City Father