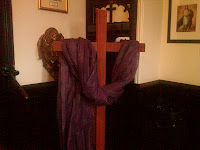 Remember, you are dust and to dust you will return.

What is it about having dirt smudged on your face and being told that you're going to die that makes this day such an irresistible draw for so many people? Could it be - could it just be - because it is true? In this "information age," we are assailed on all sides by all sorts of "information," whether we need it or not and whether it is true or not. Could it be - could it just be - that in this age of "spin" and lies upon lies, we are finally being told something that is true?

To be sure, dying has never been among the more popular topics of conversation - although that may be beginning to change now that my generation of so-called "baby boomers" has started to hit 60 and look forward to Medicare. As I look ahead to turning 63 in two weeks, I am acutely aware that I'm not anymore what I once was - and never will be again!

Death, of course, is that divine command that says "Stop" - the one divine command that we absolutely cannot disobey, no matter how hard we try. I think it is really a great example of the Church's liturgical genius that it can take something so fundamentally ugly as death and ritualize it so well!

Clearly, Lent owes a lot of its unique and powerful appeal to the way it confronts us with the inescapable reality of of who we are in relation to God and challenges us to face up to that reality - something we sinners by and large generally don't care to do and try so hard to avoid doing. Lent is the Church's annual wake-up call to make us remember who we are and where we're going and how we hope to get there.

Ultimately, of course, Lent is not about death but about life - the new life in Christ that began for each of us at baptism. Lent is the Church's annual wake-up call to take seriously who we are in Christ and what this new life of his that began for each of us at baptism really is. It's a time to reflect once again on life's big picture, to renew ourselves at the heart of who we are, in the community of Jesus' disciples - converted, renewed, and reconciled in a new and better way of being human.