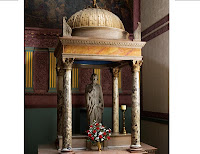 Last night, at our weekly parish Lenten supper before the Stations of the Cross, I blessed the meal using the formula for the “Blessing of St. Joseph’s Table” – a tradition of blessing food in honor of St. Joseph, who provided for the Holy Family, and whose feast the Church celebrates today.

In modern times, St. Joseph has, so to speak, come into his own. Even this morning's Knoxville News Sentinel featured a column devoted to him, entitled "Honoring Joseph, a father who 'manned up'."
In the New Testament, however, St. Joseph appears only briefly (and silently) in connection with the early life of Jesus. Matthew’s gospel praises him as a righteous man [Matthew 1:19], but significant devotion to him did not develop until much later. Amid the many calamities of 14th and 15th century Europe, however, popular preachers like St. Bernardine of Siena saw St. Joseph as a model family head and household administrator. In the 16th century, St. Teresa of Avila placed her reform of the Carmelites — and the dangerous journeys it involved — under his protection. As part of the Counter-Reformation’s strategy of re-evangelization, families were encouraged to imitate the Holy Family headed by St. Joseph. In 1729, his name was inserted in the Litany of Saints. After the Kingdom of Italy conquered Rome from the Pope in 1870, Blessed Pope Pius IX proclaimed him the Patron of the Universal Church, under which title the Church venerates him today. In 1955, Pope Pius XII established an additional new feast of St. Joseph the Worker on May 1, to counteract the Socialist-Communist May Day holiday. In 1961, Bl. Pope John XXIII made St. Joseph patron of Vatican Council II, and the following year inserted his name in the Roman canon (et beati Ioseph, eiusdem Virginis Sponsi).

In 1851, a group of Redemptorist missionaries (among them the relatively recently ordained Isaac Hecker) sailed from Europe to the U.S. Delayed by bad weather, they made a novena to St. Joseph in the hope of arriving in New York by March 19. “St. Joseph will have to do his very prettiest to get us in,” the Captain retorted. On March 16, he said “St. Joseph can’t do it – give it up.” But the priests persevered in their prayers. That night the wind changed, and the ship began to speed – at 14 m.p.h.! After 52 days at sea, the ship arrived in New York on March 19, the feast of St. Joseph, and the Redemptorists were soon ready to commence the first English-language parish mission in the U.S. - at St. Joseph’s Church in Manhattan.

In one of his most famous sermons (“The Saint of Our Day,” preached in New York 1863), Isaac Hecker, said of St. Joseph: “His virtue was like the light, colorless because it was complete. He was an all-sided man. He combined in himself the sanctities of different and variously separated states and conditions. … He was in the world and found God where he was. He sanctified his work by carrying God with him into the workshop. … He attained in society and human relationships a degree of perfection not surpassed, if equaled, by the martyr’s death, the contemplative of the solitude, the cloistered monk, or the missionary hero.”
Posted by City Father