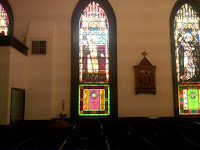 St. Patrick's Day was unavoidable in New York. In High School, I had to march in the parade. In the 1990s, when I was working for the Archdiocese, I, of course, had the day off. For the past 10 years, as a priest in New York, I was required by the rubrics of the liturgy to celebrate the local patronal feast. Here, however, although my church has a beautiful window dedicated to St. Patrick, it is a day like any other.

Great misisonary evangelizer that he was, St. Patrick undoubtedly deserves all the honor he receives, however far afield some of that honor may stray from what he was actaully all about. The son of a deacon and grandson of a priest, Patrick was born into a well-to-do family of landed gentry in the Roman province of Britain. At 16, however, his comfortable life suddenly ceased when he was captured and enslaved by Irish raiders. During 6 years as a slave herdsman in Ireland, Patrick’s conventional Christianity was transformed into an ardent, fervent faith. After a successful escape and return to Britain, he felt a call to convert the pagan Irish to Christianity. Ordained a bishop, he returned to Ireland and remained there until his death on this day in 461.

Unlike Patrick’s home island of Britain, Ireland had never been part of the Roman Empire. It was beyond the borders of what then constituted civilization. St. Patrick stands out as one of the first in Western Christian history to feel the imperative to evangelize beyond the borders of the Empire, to take literally the the Gospel’s mandate to teach all nations. In his Confession, Patrick described his sense of mission. “I want to spend myself in that country, even in death, if the Lord should grant me this favor. I am deply in his debt, for he gave me the great grace that through me many peoples should be reborn in God, and then made perfect by confirmation and everywhere among them clergy ordained for a people so recently coming to believe, one people gathered by the Lord from the ends of the earth. ... It is among that people that I want to wait for the promise made by him, who assuredly never tells a lie. ... This is our faith: believers are to come from the whole world.”

The de facto leading spokesman for the Church in contemporary Ireland is Diarmuid Martin, Archbishop of Dublin. Last month, Archbishop Martin spoke at Magdalene College, Cambridge, where he offered a telling analysis of the current state of (and the challenges facing) the Church in Ireland. That analysis was amplified further a few days ago in another talk he gave, this one on the relationship between Church and State in Ireland. Inevitably, much of his analysis speaks to a specifically Irish situation (a one-time "bastion of traditonal Catholicism" now quite changed from "the conformist Ireland of the Archbishop McQuaid era"). The present of every local Church is conditioned by its past, and the future of every local Church is correspondingly conditioned by how it intereacts with that historical legacy. That said, Archbishop Martin's analysis also addresses the wider concerns of the Church in contemporary, post-modern, secularised societies.

The bottom-line difficulty facing the Church not just in Ireland but throughout the secularised West (including even the United States) is reflected in (and in turn exacerbated by) the vocation crisis and its ripple effects. "The number of priests are falling. There is more work to be done by preists who are getting older. The task of simply responding to the deay-to-day demands of ministry leaves many priests with little time to take on new tasks and address radically new ways of life and ministry."

At the very time - the last third of the 20th century - when Western society took its giant leap into secularism, the Catholic Church also underwent a period of rapid and intense internal change. As Martin notes, "the [Second Vatican] Council was ineviatably received in terms of the culture of the day which at times may have coloured the interpretation of what the Counciul intended." Certainly in the U.S., disputes over the correct intepretation of the Council's intent have contributed to contrasting visions of what the Church is all about and a demoralyzing polarization that has further sapped the Church's evangelizing energy.

At Cambridge, Martin suggested that all was not well in "the good old days" - resulting in "faulty foundations" for "structural change." In his March lecture, he makes the broader observation that, while Church renewal requires structural renewal, such "a renewal of structures alone would be sterile." Renewal, Martin argues, "can only be shaped from the perspective of Chrsitian life" and it is "the nature of the Church" which must dictate the "strucutres of reform of the Church." My own sense is that so much debate about structures in the Church suffers from an excessive reliance on political categories of analysis and lacks precisely the all-important focus on the essential nature of the Church, which, whatever its relation with its surrounding culture, cannot allow itself to be assimilated to it.

In light of the concerns expressed in recent studies highighting the Church in America's ambibuous perfomance both in retention of its members and in the recruitment of new members, do we in the U.S. need to take more to heart this challenge from one of the heirs of St. Patrick?
Posted by City Father