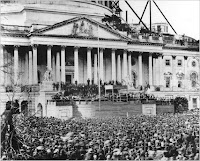 On this day in 1789, the US Constitution went into effect. It was apparently an inauspicious beginning. Not enough members of Congress had even made it to New York in time to constitute a quorum, and it would be almost two months before George Washington would finally be inaugurated as the first President. But the government did get going, and every four years after that - from 1793 through 1933 - the United States inauagurated a President on this date.

150 years ago today, it was Abraham Lincoln's turn to be inaugurated at what was perhaps the most precarious moment in American history, when the very existence of the United States was threatened as never quite before or since. (Tennessee was what was then called a "border state." It had not yet seceeded - something that would not happen finally until June).

Lincoln's 1st Inaugural Address is justly famous for his appeal - simultaneously reasoned and passionate - for the country to stay together. His emotionally powerful conclusion still resonates in a society still sadly all too deeply divided: We are not enemies, but friends. We must not be enemies. Though passion may have strained it must not break our bonds of affection. The mystic chords of memory, stretching from every battlefield and patriot grave to every living heart and hearthstone all over this broad land, will yet swell the chorus of the Union, when again touched, as surely they will be, by the better angels of our nature.

Lincoln's speech contained more than memorable and inspiring rhetoric, however. It was a well articulated expression of a philosphy of democratic constitutional government. Lincoln had strong convictions about what a democratic polity entailed and did not hesitate to express them, even to the likely discomfort of the man who a few minutes later would administer the Presidential oath of office to him - Chief Justice of the United States and author of the infamous Dred Scot decision, Roger Taney. Confronted with the calamitous consequences of that particularly malevolent exercise of judicial imperialsm, Lincoln laid out his position - the position of democratic constitutionalism - with a lawyer's clarity.

I do not forget the position assumed by some that constitutional questions are to be decided by the Supreme Court, nor do I deny that such decisions must be binding in any case upon the parties to a suit as to the object of that suit, while they are also entitled to very high respect and consideration in all parallel cases by all other departments of the Government. ... At the same time, the candid citizen must confess that if the policy of the Government upon vital questions affecting the whole people is to be irrevocably fixed by decisions of the Supreme Court, the instant they are made in ordinary litigation between parties in personal actions the people will have ceased to be their own rulers, having to that extent practically resigned their Government into the hands of that eminent tribunal.

One could hardly have said it better.
Posted by City Father