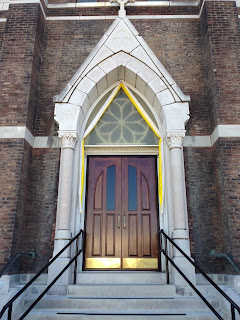 Every day, during these seven weeks we call the Easter season, the Church at Mass reads from the Acts of the Apostles – the evangelist Luke’s inspiring account of the growth and expansion of the apostolic Church from Jerusalem into the pagan Roman world (in the process transforming first the Church and then eventually even the Empire itself). Today’s excerpt [Acts 14:21-27] takes up the story of Barnabas and Paul at the farthest point of their first missionary journey, and follows them as they retrace their steps back to their original starting point, Antioch, where they had been commended to the grace of God for this work in the first place. (In other words, they weren’t freelancing, but were serving as ordained ministers of the Church.) Returning to Antioch, they now reported, not what they themselves had accomplished, but what God had done with them and how he had opened the door of faith to the Gentiles.


To us today, the Church’s growth and expansion may seem like a natural development. Back then, however, it was a bit of a surprise. Nor was it in any sense easy or automatic. When Barnabas and Paul strengthened the spirits of the disciples and exhorted them to persevere in the faith, they told them, “It is necessary for us to undergo many hardships to enter the kingdom of God.”


Such hardships, of course, include the opposition Barnabas and Paul encountered - and which the believers always encounter when the Church is doing its job in this interval between the old and the new, between Easter and the end.


What better illustration of the decisive break between the old and the new than today’s Gospel [John 13:31-33a, 34-35] - and its contrast between Judas, the personification of the world’s opposition to Jesus and his Church, leaving the Last Supper, and Jesus, commanding his disciples to create an alternative community which would already embody in the present the power of his new future. “I give you a new commandment: love one another. As I have loved you, so you also should love one another. This is how all will know that you are my disciples, if you have love for one another.”


Talk about defining boundaries and setting the bar high! The community which Barnabas and Paul were constantly inviting people to join and were also actively appointing leaders for, that community was not some social club or mutual aid organization or exotic religious cult – although its attractiveness to people may have included elements of all those things. It was in fact a new way of being, unmistakably different from the way of being left behind in the world outside, left behind with Judas, and so unmistakably different that the outside world will get the point and be attracted to it!


So it was not primarily that outside world, which Jesus talked to his disciples about at the Last Supper. His focus was rather on us, how we are to be here with one another – in that new heaven and new earth already taking shape in the present in his Church. Transformed by the Easter experience, our human solidarity in sin is being challenged by our new solidarity in Christ, through whom God really does dwell among us, making us a new people – breaking down what separates us from one another and our world and encouraging us to engage with one another and our world with new confidence.


The invitation to embrace a new life within the new community of the Church does not mean pretending that the world has somehow totally changed, that everything old has suddenly disappeared, or that we are now unaffected by bad things that happen. It doesn’t even mean that the old, worldly, social distinctions between, for example, rich and poor, young and old, strong and weak, healthy and sick, citizens and non-citizens have somehow suddenly ceased to exist in the world. But it does mean that those distinctions have been downgraded in importance and that they have lost any ultimate significance here, with us, in the Risen Lord’s Church.


Where do we find our identity – in wealth, health, social status, nationality? Or, first and foremost and ultimately, in the new and inclusive community of God’s people?
Homily for the 5th Sunday of Easter, Immaculate Conception Church, Knoxville, TN, April 28, 2013.
Posted by City Father