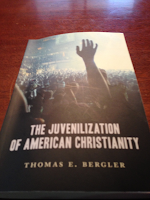 If Patriarch was this week's fun reading, my more serious recent reading was Thomas E. Bergler's The Juvenalization of American Christianity (Eerdmans, 2012), a study of how, in the 20th century, different denominations approached youth ministry and the impact that adolescent culture had on the larger Church. The author himself has taught courses on youth ministry and is one of the editors of something called The Journal of Youth Ministry. So one presumes he knows what he is talking about. His analysis of the American Cahtolic community during the period at issue certainly rings true. So I assume he is equally accurate in his history of the Methodists and othersduring the same period.

Bergler sets the theme of his book in his initial definition. "Juvenallization is the process by which the religious beleifs, practices, and developental characterisitcs of adolscents become accepted as appropriate for Christians of all ages. It begins with the praseworthy goal of adapting the faith to appeal to the young. But it sometimes ends badly, with both youth and adults embracing immature versions of the faith."
Thus the book is obviously not a broadside against youth ministry per se or even particularly prevalent styles in youth ministry as such. Rather it is an analysis of what one might call the unintended consequences of a cultural transformation. And it is, of course, a culture-wide transformation. So, for example, in his opening description of "a typical middle-class Americna church," he notes how "people are dressed less formally than they will be when they go to work on Monday morning." Lamentably true as that may be, it is also - and increasingly - the case that people dress pretty informally on Monday too. The Churches may perhaps be faulted for not having more strenuously resisted all sorts of dubious cultural changes, but the fact is that the larger culture has been moving in the direction of a less adult approach to life and work and everything else for quite some time. The Churches have certainly been a part of that but hardly the sole agents of it!
Still, his concern, of course, is the impact of all this on religious faith and religious institutional life. He recognizes that thriving congregations are typically those that invest in youth progams. Considering the continued growth of white Evangelical Churches,he says they "are the ones that look most like the successful youth ministries of ther 1950s and 1960s." He is all for Churches effectively reaching out to youth in ways youth can relate to. The challenge he poses, however,is for the Churches "to teach what the Bible says about spiritual maturity, with a special emphasis on those elements that ar eneglected by juvenalized Christians."
In summary, his overall analysis of the impact of the "juvenalization" proces on the state of American religion is this: "White evangelicals invested heavily in young people and aggressibvely adapted to their preferences for an informal, entartaining, feel-good faith. They ended up with churches full of Christians who think that the purpose of God and the Christian faith is to help them feel better. Liberal Protestant youth leaders seriously misjudged the cultural tastes of young people and underestimated how much effort it woudl take to form countercultural social activists. They ended up with aging congregations and declining numbers. Roman Catholics were slow to juvenalize their churches and invested less in the spriitual formaiton of youth than they had before the crises of the sixties. They ended up with thousands of nominal Catholic adherents with relativley low levels of religious knowledge and commitment."
Naturally, I found his analysis of Americna Catholic life especially interesting to mer personally. In a chapter suggestively titled "Why Everyone Wanted to Get out of the Catholic Ghetto," he describes how successful the Catholic Church was in the period 1945-1965 in creating a unified, cohesive set of Catholic institutions, which then unexpectedly fell apart. "The young Catholics of this era  were much better educated avout their faith and practiced it more faithfully than Catholic teenagers today," he acknowledges. He then notes that "these same young people later repudiated what they called the 'Catholic ghetto.' And in some ways, the American Catholic church has yet to recover from the chaos and confusion that resulted from the collapse of its 1950s system of spiritual formation."
As someone who grew up a Catholic during that period and was deeply formed in and by it, I really resonated with his account. Bergler quotes Garry Wills (back before Gary Wills became an angry, embittered, Catholic-basher) that "It was a ghetto undeniably. But not a bad ghetto to grow up in" (Bare Ruined Choirs, 1972). The book is well worth the read just for its effective evocation of that long-long past - and for the lesson of how such a comprehensive and successful system of spiritual formation could ultimately fail and completely collapse.
While "Catholic education helped young people develop critical thinking skills and gave them a rich moral and theological terminology that was stronger than most anything being offered to young Christians of any stripe today," it did not counteract the desire for a "normal" American middle-class life. Nor did it prepare Catholics to reach youth effectively in the absence of "a dense network of mutually reinforcing institutions." And, on top of everythign else that went wrong in the Catholic Church in the 1960s, "there was a sudden collapse in adult investment in youth work."
The lesson to be learned from the Catholic expeirence is how dependent the succesful 1945-1965 Catholic culture was on that "dense networkd of mutually supportuing institutions." As the larger society's structures that had hitherto been so supportive suddenly collapsed, the internal Catholic ones, it turned out, weren't up to the job anymore either. "The Catholic ghetto had produced dramatic results with only a superficial juvenalization that had not conceded much to the deeper trends in youth culture. As a result, Cahtolic youth leaders had little practice in creatively appealing to young people who were no longer forced to attend their programs and who were less and less likely to believe something just because a religious authority figure said it."
It sounds like the age-old problem ancient Israel faced when the people opted for normalcy over specialness - asking for a king as other nations have (I Samuel 8:5)!
Posted by City Father