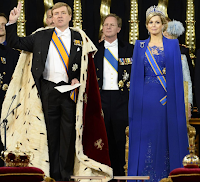 After 123 years, the Netherlands has a king, - Willem Alexander, who acceded to the Dutch throne and the headship of the royal House of Orange today upon the abdication of his mother, Queen Beatrix. She had been the third in the trio of Dutch Queens to reign in the Netherlands since 1890. The first of those three, Queen Wilhelmina, was one of the great symbols of wartime resistance to Hitler. Along with King Haakon of Norway, Charles DeGaulle of France, and Winston Churchill, she chose not to be on what then appeared to many to be "the right side of history" in 1940").
King Willem Alexander's grandmother, Queen Juliana presided - tearfully - over the independence of Indonesia and the effective end of the Dutch Empire. In its time, however, the Dutch Empire had once mattered on the larger world scene. Reminders of that are the orange bar on the flag of New York City (an acknowledgment of the Dutch role in the founding of one of the world's greatest cities) and the orange stripes on my academic gown (a celebration of the Dutch royal house, the House of Orange, and its pivotal role in England's "Glorious Revolution" of 1688, which ousted that country's last Catholic king and solidified the supremacy of Parliament over the monarch).

King Willem Alexander's wife, Queen Maxima is an Argentinian by birth. It's been a good year for Argentina so far!

The House of Orange links the modern Netherlands back to William the Silent's 16th-century revolt against Catholic Spain. By royal standards that's a short span of history. Some other reigning houses boast a longer lineage and link their 21st century peoples back a thousand or more years. It is one of the functions of royalty to connect and bind. Obviously the connection back to the nation's past binds a people to their heritage and is an important value in itself. But royalty also connect and bind their people in the present. Commenting on the recent British funeral of Margaret Thatcher, someone questioned the propriety of so much state ceremonial for a mere politician - the argument being that, unlike royalty, whose role is to unite a nation, politicians divide it.

In today's world, perhaps an additional symbolic function of royalty is that kings and queens do not choose their jobs, but receive them as a civic calling, a secular vocation. That makes royalty a wonderful witness to the value of a life focused on something bigger than oneself, something so ncessary for civilization but so unvalued in today's world.