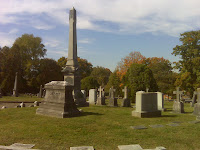 The month of November is traditionally devoted in a special way to remembering and praying for the dead. A Commemoration of all the Faithful Departed on November 2 (“All Souls Day”) has been observed in the Church at least since 988, when St. Odilio of Cluny established such an observance in his influential monastery. Tomorrow afternoon, we will have our annual recitation of the Rosary for the Faithful Departed at our parish cemetery (photo).
In preparing for this year’s November, I have been reading The Good Funeral: Death, Grief, and the Community of Care, by Thomas G. Long and Thomas Lynch. Lynch is a funeral director (and son of a funeral director).  Long is a Presbyterian pastor and writer. The authors reflect on how “remarkable changes in religious practice over the past half century are coincident, correlated to, and in many instances, trafficked in cause-and-effect with changes in our mortuary customs.” In reaction to this, the authors encourage us to recall the original function of a funeral. “The formula for funerals was fairly simple for most of our history: by getting the dead where they need to go, the living got where they needed to be.” For the authors, a funeral has four essential elements – someone who has died, survivors who care, some understanding (usually a religious one) of the meaning of this situation, and the practical need to attend to the disposition of the dead person’s body. Contrary to some contemporary tendencies that downplay the physical presence of the dead, the authors place great stress on its significance and argue that “a culture prepared to hide the bodies of the dead as if they were an embarrassment or an insult to the living … is also a society prone to cast aside its elderly, neglect its sick, leave its poor without shelter, and deprive its young of proper care.” They remind us that one thing that most religions agree on is that “we will learn wisdom about how to live when we care lovingly and reverently for the bodies of the dead.”
Reading Long and Lynch reminds me of what Saint Augustine of Hippo wrote some 16 centuries ago, in his treatise “On the Care for the Dead” (De cura pro mortuis gerenda). “The bodies of the dead are not to be uncared for in any way, since these bodies are nearer and dearer to us than any garment. These bodies are not ornaments or aids applied from without; they are of the very nature of man. … The care bestowed upon the burial of the body is no aid to salvation. It is merely an act of humanity, regulated by affection for ‘no man hates his own flesh.’ It is most proper that a man should care for the corpse of his neighbor as best he can, when that neighbor has died. If these offices are paid to the dead, even by those who do not believe in the resurrection of the body, how much more should they be paid by those who do believe in the resurrection on the last day. Thus these duties toward a body which, although dead, is destined to rise again and to live throughout eternity, are in a way a testimony of faith in that belief.”
Posted by City Father