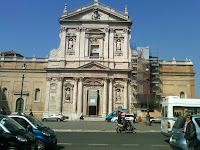 Today is the 1st anniversary of the death of a grand old Paulist priest, Father Robert A. O'Donnell (1924-2012). When I first met him in 1981, when I was a novice, Bob was Director of the Paulist Development Office, a job he held for some six years. But, both before and after his interval as Development Director, Bob was a seminary professor of philosophy and a priest at the Paulist Church of Santa Susanna in Rome. Teaching Philosophy and ministry in Rome were undoubtedly his two great loves.

As a young priest in the early 1950s, he had studied for his doctorate at Louvain in Belgium and then taught philosophy for six years at the Paulist seminary in Washington, DC. Then, late in life, he taught again for 20 years in the pre-Theology program of the Archdiocese of New York. I overlapped with Bob, living at the Paulist Mother House twice during that final period for a total of 13 years. He was always a true gentleman to live with. As for his teaching, when he died I emailed two former parishioners who had joined the New York seminary, who had been taught philosophy by Bob and both of whom then went on to study theology in Rome. Both spoke highly of him, which I knew echoed the high regard he had expressed for them as students. I guess it was one of those happy cases of  a devoted teacher having good students and good students having a devoted teacher!

Less happy, I suspect, was his two-year tenure as President and Superior of the Paulist Seminary in Washington at the end of the 60s, that terribly turbulent time which we now recall with some combination of faux nostalgia and chagrin. It was a challenging time, but Bob survived and moved on.

Along with philosophy, Bob's other truly great love was Rome. He had served as a curate at Santa Susanna in the early 60s, through the exciting years of the Second Vatican Council. He returned to Rome as Paulist Superior and Procurator General for another eight years in the 1970s. Listening to him in his later years, I always got the feeling that those years in Rome had really been a most wonderful time for him. He loved interacting with prelates in Rome and representing the American Church there. Bob really understood and appreciated the importance of our Paulist ministry in Rome and what a great privilege it is to be responsible for the parish for the American community at Santa Susanna. I had occasion to witness Santa Susanna's great ministry during my stay in Rome in early 2012, I was especially impressed by Santa Susanna's contribution to the pastoral formation of seminarians from all over the U.S. who are studying in Rome at the North American College.

Bob returned to Rome again for yet another couple of years in the 1980s, before an interlude of ecumenical work in Bossey, Switzerland, and an adventurous three years as an assistant at the Tantur Ecumenical Institute in Jerusalem.

Like many others blessed with many acquaintances, Bob annually sent out a lengthy "Christmas Letter." I always looked forward to receiving his and made sure he in turn received one from me. When he died last November, his Christmas Letters were all written and ready to be mailed. Those who sorted through and disposed of his personal possessions made the decision to send the letters - with a notation of Bob's death in case the recipient would not have heard otherwise. And so it was that some weeks after learning of Bob's death, I was surprised to receive his annual Christmas Letter, complete with his up-to-date observations on things!

In 31 years of religious community life, I have been privileged to live with and come to know so many interesting and admirable priests. The exemplary way Bob O'Donnell lived his vocation reminded me of a comment recounted by Isaac Hecker. A visiting priest said to Hecker: "You have a Community, and you live and work together in harmony; but I notice that every man holds his own individuality of view and of character generally." Hecker replied that he was glad his visitor had noticed that "because it was just what ought to be."