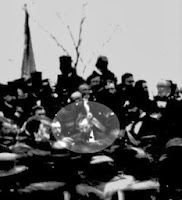 Last year's hit movie Lincoln opens with a scene in which President Abraham Lincoln talks to several soldiers, one of whom seems to have memorized the short speech Lincoln had delivered a little over a year earlier, on November 19, 1863, at the dedication of the National Soldiers' Cemetery at Gettysburg, PA. (In July 1863, Gettysburg been the site of one of the most significant battles of the Civil War.) The young soldier in that scene anticipated what many school children have done in the century and a half since - memorize what has since become one of the most famous and familiar examples of American civic oratory, now literally engraved in stone for the ages on the south wall of the Lincoln Memorial in Washington, DC.

At the time, however, not everyone apparently agreed with the judgment of subsequent generations. The Harrisburg Patriot-News recently retracted its initial evaluation of Lincoln's speech in an 1863 editorial: "We pass over the silly remarks of the President. For the credit of the nation we are willing that the veil of oblivion shall be dropped over them and that they shall be no more repeated or thought of." Last week, however, the newspaper expressed the following revised opinion: "Seven score and ten years ago, the forefathers of this media institution brought forth to its audience a judgment so flawed, so tainted by hubris, so lacking in the perspective history would bring, that it cannot remain unaddressed in our archives."

If nothing else, the  Harrisburg Patriot-News illustrates how ephemeral immediate, short-term political judgments may be - an even more relevant caution in today's era of rapid response and immediate rush-to-judgment!

At Gettysburg that November day, the principal speech on the program was not Lincoln's but a two-hour, 13,000-word address, delivered by a great and famous American orator, Edward Everett. The President was invited to deliver merely "a few appropriate remarks" afterward. And that was what Lincoln did.

In his address, Lincoln recalled the essential premise of the American experiment - equality. The complexities of the Civil War Lincoln boiled down to one central question - whether a society of equal citizens was in fact viable, "whether that nation, or any nation so conceived, and so dedicated, can long endure." It was Lincoln's challenge as a war leader - and his great accomplishment - to answer that question, to find in the seemingly senseless carnage of that terrible war a transcendent purpose. That he did in his vindication of the founding principle of equality and the institutions of citizen self-governance which equality legitimizes.

"It is for us the living, rather, to be dedicated here to the unfinished work which they who fought here have thus far so nobly advanced. It is rather for us to be here dedicated to the great task remaining before us -- that from these honored dead we take increased devotion to that cause for which they gave the last full measure of devotion -- that we here highly resolve that these dead shall not have died in vain -- that this nation, under God, shall have a new birth of freedom -- and that government of the people, by the people, for the people, shall not perish from the earth."
Posted by City Father