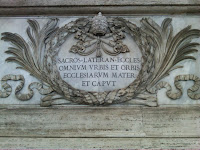 I’m sure I’ve told this story before, but it’s always worth repeating. One day some 30 or so years ago, when we were both seminarians, my best friend was kidding me about my rapidly diminishing hair, to which I responded by chasing him down the hall and up the stairs, where he took refuge in the chapel, grabbed hold of the altar, and confidently declared, “You can’t hit me here. This is a church!” (P.S., I didn’t hit him, and we remain good friends to this day).
Churches are indeed special places. As a priest, I have been privileged to have served in two amazingly beautiful and historic churches – St. Paul the Apostle in New York, the “Mother-Church” of the Paulist Fathers, and Immaculate Conception in Knoxville, the Victorian Gothic “Mother Church” of the city of Knoxville. But there are many churches and many styles of churches, each with its own richness - rugged Romanesque churches, their interior vaults shielded by exterior towers, great gothic cathedrals, their long naves forming frames for wide windows of stained glass through which light is totally transformed and whose pointed arches just lift one to another world where gravity seems gone, and beautiful baroque churches, whose florid magnificence invites one to identify with the mystery so powerfully portrayed in their architecture. Sadly, there are also some sterile modern churches, whose standard-issue ugliness expresses the spiritual impoverishment of our age, and testifies in its own way to a culture in the process of losing its faith and increasingly bereft of hope and lacking in love.


From time immemorial, people have had special places – hilltops, sacred springs, stone temples – to which to go for worship. God, of course, is personal, not local, not confined to any one place. Still, as human beings we can only operate in space and time, which is why God himself became human – in a particular place and at a particular time in human history. So it’s no surprise that, through the ages, God has continued to inspire his people to set aside special places in which to assemble to worship him. So Solomon built the Jerusalem Temple to be a holy house of prayer and sacrifice. So too the Roman Emperor Constantine the Great converted the Lateran Basilica in Rome into a church – the Pope’s church, and hence “the mother and head of all the churches of the City and the world” [photo] – the anniversary of whose dedication on November 9, 324 A.D. the Church solemnly celebrates today.
It’s no accident that traditional Gospel reading for the Dedication of a Church was Luke 19:1-10, the story of Zacchaeus, the Tax Collector who famously climbed a tree to see Jesus – a usage suggested, I suppose, by Jesus’ words: Today salvation has come to this house. And that indeed is the purpose of a church.
Zaccaeus did not make a church out of his tree. Rather, Jesus called him down from his tree – Zacchaeus, come down quickly, for today I must stay at your house – in order to create a church out of his house, for the Son of Man has come to seek and save what was lost.
Before we build beautiful shrines and temples, God has first acted upon us. So it is not because we build buildings that we have churches, but because God has made himself the God of those buildings by first of all making himself the God of the builders – by building us, together with his crucified and risen Son, into a consecrated people, whom we also call a Church.
Salvation came to Zacchaeus’ house that day, when in response to Jesus’ initiative, Zacchaeus received him with joy, boldly turning his life around. Today – and everyday – salvation comes to this house also, this church, to which we come in order to see Jesus, and within which Jesus invites himself to stay with us. Here, we too can experience the real change Zacchaeus experienced – doing what we would never otherwise have done, becoming what we would never otherwise have become, a community of forgiven sinners changed by our faith in him who invites himself to stay with us here in this house today.