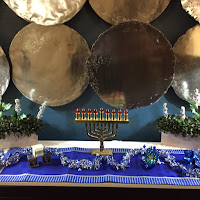 The Memphis, TN, hotel where I stayed while attending a meeting earlier this week was, of course, quite decked out for Christmas. But it also featured this Chanukah display in anticipation of the week-long, joyful, Jewish holiday that begins at sundown tomorrow.

Unlike Passover and Pentecost, Chanukah has no precise Christian analogue. Chanukah and Christmas coincide as winter light festivals, but otherwise are unrelated either historically or theologically.

In the bible, the two books of Maccabees recount how, in the 2nd century B.C., Israel came under the rule of the Syrian-Greek Seleucids, who outlawed Jewish practices and attempted forcefully to Hellenize the Jewish people – and how, an army of faithful Jews, led by Judah Maccabee (Judas Maccabeus) of the Hasmonean dynasty defeated the Gentiles, reconquered the Jerusalem Temple which had been desecrated, and festively rededicated it for sacrificial worship on the 25th of Kislev (December 14, 164 B.C.)

Jewish tradition amplifies the account with the story of how, when they sought to light the Temple's the seven-branch candelabrum (menorah), they found just a one-day supply of olive oil that had escaped contamination by the Greeks. Miraculously, that one-day supply burned for eight days, until new oil could be prepared under ritually pure conditions.

The festival of Chanukah was then instituted to commemorate these events and the miracle of the oil. 1 Maccabees 4:36-59 tells the story of the rededication of the Temple, ending with the decision to celebrate an 8-day Dedication Festival each year. 2 Maccabees 10:1-8 repeats the story and adds  the idea of the 8-day fall Feast of Booths (Sukkot) as a model for Chunkah. It was during the celebration of this annual Festival of the Dedication" (cf. John 10:22) that Jesus gave his famous Good Shepherd discourse.

At the heart of Chanukah is the nightly lighting of the special Chanukah menorah: one lamp or candle on the first night, two on the second, etc., until all eight lights are kindled. When I was in kindergarten in a New York public school in 1954, we had a chalk menorah on the blackboard and used to "light" in chalk one of its lights each day! Other popular Chanukah customs, which I only learned about later in life, include eating foods fried in oil, e.g., potato latkes (pancakes), playing dreidel (a spinning top inscribed with Hebrew letters, and the giving of money (Chanukah gelt) to children.

Not having been prescribed in the Torah, Chanukah is considered a minor holiday. Thus, it does not compare with the position of Christmas in the Christian calendar. But, occurring in December, it is inevitably a Jewish alternative to Christmas - as well as functioning, like Christmas, as an authentic winter light festival. As an alternative to winter's darkness, Chanukah can comfortably accompany Christmas as a winter holiday for post-modern secular society, a contemporary pagan Saturnalia of lights and gift-giving.

But, like Christmas, the religious Chanukah holiday highlights a powerful message. In the case of Chanukah it is a message about faithfulness to religious law and tradition, the bulwarks of society, the cornerstone of which is authentic faithful worship in spirit and truth.
Posted by City Father