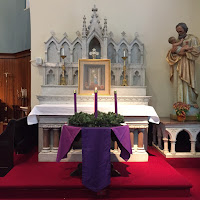 In P.D. James' dystopian novel, The Children of Men (1992), a group that meets in an old church as its cover calls itself the "Cranmer Club," and claims to be devoted to studying The Book of Common Prayer. "Is it?" is the response. "So what do you do when the State Security Police ask you to recite the collect for the First Sunday in Advent?"

(The Children of Men was eventually also made into a movie in 2006, but I can't recall whether that episode also made it into the film version.)

Thomas Cranmer (1489-1556), Henry VIII's and Edward VI's Archbishop of Canterbury (1533-1555) did enormous and terrible damage to both the indissolubility of marriage and the unity of the Church, but he also gave us the literary treasure that is The Book of Common Prayer. And, for the First Sunday of Advent, the BCP has this justly famous collect: Almighty God, give us grace that we may cast away the works of darkness, and put upon us the armour of light, now in the time of this mortal life, in which thy Son Jesus Christ came to visit us in great humility; that in the last day, when he shall come again in his glorious Majesty, to judge both the quick and the dead, we may rise to the life immortal; through him who liveth and reigneth with thee and the Holy Ghost, now and ever. Amen.

In the Prayer Book, so important is this collect - inspired by Advent Sunday's traditional Epistle (Romans 13:8-14) - that it is immediately followed by a wonderful rubric requiring it to be repeated with the other collects every day during Advent! (At least in my limited experience in England 10 years ago, this wonderful practice of multiple collects  - or, as we used to call them. "commemorations" - is still alive and well in the C of E liturgy.)

The Collect for the First Sunday of Advent in the contemporary Roman Rite is certainly an appropriate prayer for Advent, but that fine prayer is nowhere nearly as evocative as Cranmer's: Grant your faithful, we pray, almighty God, the resolve to run forth to meet your Christ with righteous deeds at his coming, so that, gathered at his right hand, they may be worthy to possess the heavenly kingdom.

Perhaps the closest we came in the old Roman Rite to the sentiments so well expressed in Cranmer's beautiful prayer was the old Collect (now discarded) for Christmas Eve: O God, who make us glad with the yearly expectation of our redemption, grant that we who now joyfully receive your only-begotten Son as our Redeemer, may also without fear behold Him coming as our Judge, the same our Lord Jesus Christ your Son: Who lives and reigns with you in the unity of the Holy Spirit, God, world without end. Amen (Deus, qui nos redemptiónis nostræ ánnua exspectatióne lætíficas: præsta; ut Unigénitum tuum, quem Redemptórem læti suscípimus, veniéntem quoque júdicem secúri videámus, Dóminum nostrum Jesum Christum Fílium tuum: Qui tecum vivit et regnat in unitate Spiritus Sancti, Deus, per omnia saecula saeculorum. Amen.)

Discarded or not, the old Christmas Eve collect would be a good daily prayer for Advent, as would the current 1st Sunday prayer, and - maybe best of all - Cranmer's Advent collect!