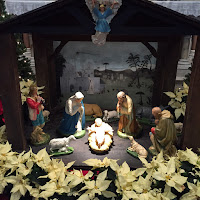 One of the English-speaking world’s more popular modern Christmas traditions is the Service of Nine Lessons and Carols created in 1918 at King’s College, Cambridge. It begins with a single choirboy singing the 1st verse of the 19th century English hymn Once in David’s Royal.  The choir and eventually the whole congregation soon join in the singing. One of the verses seems to have been tailor-made for today’s feast of the Holy Family: And through all His wondrous childhood / He would honor and obey, Love and watch the lowly Maiden, / In whose gentle arms He lay: Christian children all must be / Mild, obedient, good as He.

Of course, today’s feast of the Holy Family is about more than children being told to obey their parents. Introduced by Pope Leo XIII in 1892, it reflects the modern Church’s concern, in the wake of so much revolutionary social change, to reaffirm the fundamental importance of the family as a natural institution in society and as the unique human community through which society institutionalizes its commitment to the next generation. Addressing that concern is inevitably a critical component of the Church’s social mission in the modern world, one of the reasons why two sessions of the Synod of Bishops, last year and this, were both devoted to the family, specifically to the family’s vocation and mission in the church and in the contemporary world.

Like those Old Testament parents Hannah and Elkanah, about whom we heard in today’s 1st reading [1 Samuel 1:20-22, 24-28] , the Gospel [Luke 2:41-52] depicts Jesus, Mary, and Joseph a devout family, faithful to their religious obligations, which include the annual Passover pilgrimage to Jerusalem. So, in the story we just heard, Mary, and Joseph travel to the Temple in Jerusalem for Passover. Jesus is now at an age when he will soon assume his responsibilities and obligations as a member of God’s Chosen People, and so Jesus also accompanies his parents and their extended familial and social network on the pilgrimage.

In one sense, this can be thought of as a kind of “vocation” story – Jesus’ first public acknowledgment of who he is and what his mission will be. Already anticipating his later behavior as an adult, Jesus here puts his priority on his relationship with his heavenly Father rather than his earthly family. Hence, his mission is to be in his Father’s house, rather than in the caravan among relatives and acquaintances. Likewise, the wonder experienced by the teachers in the Temple anticipates the wonder which so many will soon experience at Jesus’ teaching during his public life - and the wonder we continue to experience as we experience his continued life among us in his Church.

Like Hannah and Elkanah, Mary and Joseph had a son dedicated to the Lord, a son whose mission in life would take him – and his followers – beyond the limits of natural human relationships. We can hear this in the contrasting uses of the word “Father,” first in Mary’s question and then in Jesus’ surprising response. Through the Church, our new relationship with God in Jesus incorporates us into a new network of relationships both wider and more inclusive than any natural human relationships – including even the family. As this year’s Synod said, “Jesus made family relations relative in the context of the Kingdom of God.” Jesus introduced what the Synod called a “revolution in affection,” which represents “a radical call to universal brotherhood” [Synod 2015 Final Report, 41].

At the same time, just like the 12-year old Jesus, we Christians continue to be involved in and dependent upon that natural network of human relationships, of which the family is the first.  Hence, “the Church has developed over the centuries a rich teaching on marriage and family” [Synod 2015 Final Report, 42]. Thus, Pope Francis has called the family “the fundamental cell of society, where we learn to live with others despite our differences and to belong to one another; it is also the place where parents pass on the faith to their children” [Evangelii Gaudium, 66].

On the other hand, as we are all so well aware, the family today is experiencing what Pope Francis has called “a profound cultural crisis, as are all communities and social bonds.” [Evangelii Gaudium, 66]

The reality in our society is increasingly one in which fewer and fewer people feel that they are able to get married and form families. And many who do marry experience that their marriages do not last. There are obviously all sorts of social problems, such as decades of stagnant wages, which contribute to these difficulties. And then there are all sorts of social problems which follow from these difficulties. Obviously, wise public policies are needed to address these problems and their social and economic causes.

The Church meanwhile is called upon not only to advocate for such sound public policies but also to accompany families that are stressed in these various ways. The Synod stressed the importance of the parish as a “family of families,” [Synod 2015 Final Report, 77] and the need to “instill in families a sense of belonging to the Church, a sense of ‘we’ in which no member is forgotten” [Synod 2015 Final Report, 90].

The Jerusalem Temple to which Jesus, Mary, and Joseph went on pilgrimage, was the principal and privileged place where one would experience God’s presence among his People. Likewise, what happens here in our uniquely privileged encounter with the Risen Lord in the Eucharist is intended to intrude into and transform everything else and all those day-to-day natural human relationships, including our families.

Today’s feast calls our attention to the transforming effect of the Incarnation in all aspects of our daily life. When he established this feast, Pope Leo XIII wrote: “When Jesus, Mary, and Joseph are invoked in the home, there they foster charity, there they exert a good influence over conduct, set an example of virtue, and make more bearable the hardships of every life.” (Neminem fugit, 1892)