Through the Open Door 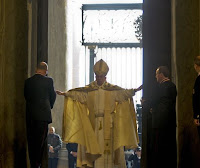 Today, on the solemnity of the Immaculate Conception of the Blessed Virgin Mary, on the 50th anniversary of the close of the Second Vatican council, and on the 1000th day of his own papacy, Pope Francis opened the Holy Door at Saint Peter's Basilica to begin the Extraordinary Jubilee Year of Mercy.

"This Extraordinary Year," the Holy father assured the world in his homily at the Mass that preceded the opening of the Holy Door, "is itself a gift of grace.  To pass through the Holy Door means to rediscover the infinite mercy of the Father who welcomes everyone and goes out personally to encounter each of them.  It is he who seeks us!  It is he who comes to encounter us!  This will be a year in which we grow ever more convinced of God’s mercy."

As was the case 50+ years ago when Saint John XXIII convened the Second Vatican Council, the advent of this Holy Year is overshadowed by any number of prophets of doom who worry whether this is the right time for such an initiative with the civilized world in so much danger from the forces of barbarism. But I remember how the very first month of the Council's deliberations was overshadowed by the greatest crisis of the nuclear age, the Cuban Missile Crisis. That time it was two civilized societies that went to the brink - and brought the world to the brink - of nuclear annihilation. None of that minimizes, of course, the true dangers that beset us or the need for policymakers to take adequate and appropriate action to repel today's threats to civilized life. But it is a reminder of where our priorities need to be and remain.

"In passing through the Holy Door," the Pope continued in his homily, "may we feel that we ourselves are part of this mystery of love, of tenderness.  Let us set aside all fear and dread, for these do not befit men and women who are loved.  Instead, let us experience the joy of encountering that grace which transforms all things."

This Jubilee Year reminds us that there can be no substitute for authentic encounter in the relationship between God's word and the world, between the Church and the world. As Pope Francis reminded us regarding the Council:

"Before all else, the Council was an encounter.  A genuine encounter between the Church and the men and women of our time.  An encounter marked by the power of the Spirit, who impelled the Church to emerge from the shoals which for years had kept her self-enclosed so as to set out once again, with enthusiasm, on her missionary journey.  It was the resumption of a journey of encountering people where they live: in their cities and homes, in their workplaces.  Wherever there are people, the Church is called to reach out to them and to bring the joy of the Gospel, and the mercy and forgiveness of God.  After these decades, we again take up this missionary drive with the same power and enthusiasm.  The Jubilee challenges us to this openness, and demands that we not neglect the spirit which emerged from Vatican II, the spirit of the Samaritan, as Blessed Paul VI expressed it at the conclusion of the Council.  May our passing through the Holy Door today commit us to making our own the mercy of the Good Samaritan."

I could hardly help hearing echoes of Isaac Hecker (specifically his famous 1963 sermon, "The Saint of Our Day"), in the Pope reference to "encountering people where they live: in their cities and homes, in their workplaces." Such references remind us of the perennial nature of the Church's internal and external evangelizing mission and of the challenge of encounter.

When I last walked through the Holy door at Saint Peter's in November 2000, I hardly ever expected to have such an opportunity again in my lifetime. May we all - individually and as a Church - make the most of it!