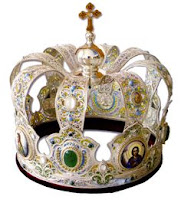 After some 20 or so years together playing husband and wife (and becoming real parents with a real family in the process), Soviet spies Philip and Elizabeth Jennings suddenly got really married in this week's episode of  FX's The Americans - and by a real Russian Orthodox priest! The series has been full of surprises, with serious issues being addressed amid gratuitous sex and murderous mayhem. There have been too many subplots to keep track of at times. But one constant has been Philip and Elizabeth's family dynamic and their complex relationship, which has weathered so many stresses and has somehow gotten stronger and more genuine over time. Like their assumed American identities, their marriage had been just another manufactured document until Philip surprised Elizabeth with the suggestion that they make it real.

As committed communists, Philip and Elizabeth are presumably faithful atheists. As Clark, Philip went through the motions of a Protestant wedding with Martha, but that was, of course, completely phony. More seriously, Paige's serious religious commitment and her pastoral relationship with Pastor Tim have forced them to acknowledge religion's reality and role in their own immediate family. But who ever expected this?

It seems we were being prepped for this in last week's episode's curious scene in which Philip met up with a former contact of Gabriel’s, who just happens to be a Russian Orthodox priest. That scene was a reminder that Orthodoxy has always been entwined with the State. Some have even described  the Orthodox Church as essentially a department of the State. It has often been alleged that the Soviet Union used Russian Orthodox clergy as agents, for example, to infiltrate ecumenical organizations like the World Council of Churches. So the idea of an Orthodox priest as someone Gabriel was "running" seemed perfectly plausible.

At the time I wondered whether the priest would reappear in some religious way. It seemed too much of a setup when he ended their meeting with the suggestion that Philip try prayer, which he suggested was a great solace “when you live this kind of life.” Philip hasn't yet turned to prayer, but he did decide to make his marriage real - and turned if not to prayer then at least to the Church's ritual to make their marriage real.

It was a simple marriage service - presumably the bare minimum for validity. But the priest prayed, invoked the Trinity multiple times, blessed the couple (who were holding lighted candles), and even ritually crowned them. Since obviously a Soviet civil wedding was an impossibility in the US, perhaps this seemed to Philip like the only way to do it that was really Russian (maybe more Russian even than a soviet ceremony)..

What Philip and Elizabeth don't yet know (but the audience does) is that the Soviet Union has less than a decade left to live and that the Orthodox Church will soon be poised to reassert itself as the more meaningful and vibrant expression of Russian reality. Like perhaps many others among their contemporaries, Philip and Elizabeth seem to be discovering belonging without believing.
Posted by City Father