Built into a Spiritual House 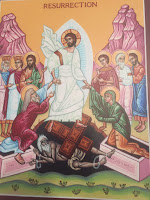 Behold, I am laying a stone in Zion, a cornerstone chosen and precious!
It was just seven weeks ago – on my 69th birthday, as it happened – that I was privileged to be present for the unveiling of the cornerstone of our new diocesan cathedral. Originally, of course, a cornerstone was exactly that - the first stone set in the construction of a building’s foundation. Over time, what we now call a cornerstone has evolved into a stone ceremonially set in a prominent location on the outside of a building, usually with an inscription indicating the date of the building’s construction. (See, for example, the cornerstone from the former parish school building, on display in the vestibule of the church, or the cornerstones of the present and former rectories near the main entrance of the parish office.) Just as a church building is symbolic of the entire Church community, the cornerstone of a church building is symbolic of Christ himself. We just heard Saint Peter tell us to let ourselves be built into a spiritual house – of which Christ is the chosen and precious cornerstone.

On the night before he died, Jesus tried to console his disciples with the now familiar image of his Father’s house’s many dwelling places. Apparently, his disciples felt the need for even more reassurance “Master, show us the Father,” Philip said to Jesus in the Gospel we just heard [John 14:1-12]. And how did Jesus answer? “Whoever has seen me,” he said to Philip, has seen the Father.” Jesus is, as it were, our direct line to God, and we experience God’s presence and activity in our lives most fully and effectively in our experience of Jesus.

Now the normal way we meet Jesus – and also the normal way we share him with others – is in that aforementioned spiritual house, the Church, where we do so not as isolated individuals, but as “a chosen race, a royal priesthood, a holy nation, a people of his own,” as Saint Peter proclaimed in today’s 2nd reading [1 Peter 2:4-9], quoting God’s own words to the people of Israel at Mount Sinai [Exodus 19:5-6].

If nothing else, this episode and others like it remind us yet again of the perennial problem of factional conflict, of cultural and ethnic divisiveness, and of ideological division and polarization, that characterize our world and can so easily undermine the unity and universality even of the Church and thus get in the way of its mission – not just in 1st-century Jerusalem but in every time and place. Then as now, aspects of life within the Church community can sometimes seem simply to replicate the conflicts and divisions that themselves seem to define our secular society – so much so that some have suggested that Americans increasingly choose their denomination or their local parish on the basis of their politics!

But there was more to the story of the apostolic Church than out-of-control factional conflict. After all, the Jerusalem Church didn’t split into separate sects. Instead of a threat to their unity, this episode shows us how - trusting in the Risen Christ’s continued, living presence as Lord in his Church - the apostles responded to the challenge they faced with creative confidence. Thus, the apostles paved the way step-by-step for their little sectarian community to expand and eventually to become the world-wide, multi-cultural Church it now is.

Today we continue to be challenged to manifest once more that “true permanent and burning enthusiasm frought with the greatest of deeds,” which is what it will take for us to continue to be that powerful link that Christ intended his Church to be to all types of people – a Church as alert as were the apostles to the challenges and equally as ready to respond to the opportunities.

Homily for the 5th Sunday of Easter, Immaculate Conception Church, Knoxville, TN, May 14, 2017.