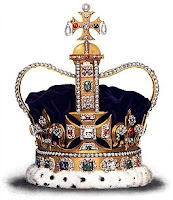 The one undoubted benefit of the American Revolution in my modest opinion was the replacement of tea by coffee as the preferred American drink. The Revolution's other consequences have always seemed to be more open to honest debate. One of those consequences, which may bear a lot of blame for the long-term debasing of our political culture, has been to deprive us of a King, for which the faux royalty of our celebrity culture have been at best a very poor substitute.  And so with endless fascination Americans constantly gaze across the sea not just at any royal house but at the very same one we so violently abandoned 240 years ago.

Last night's 90-minute PBS drama King Charles III is a televised adaptation of a British stage play by Mike Bartlett, written (like Shakespeare's plays) in Blank Verse, and centered on the accession and subsequent reign of the present Prince of Wales as King Charles III of the UK. It features a highly implausible constitutional fracas in which the King refuses the Royal Assent to a measure limiting the freedom of the press, which sets off a calamitous chain of events within the Royal House, the Government, and the Kingdom at large.

The conflict motif reminded me immediately of the 1993 BBC series To Play the King (the sequel to the 1990 BBC series House of Cards), which featured a newly crowned King (not explicitly identified as Charles, but obviously modeled on him - even to the point of being divorced) in conflict with an unscrupulous Prime Minister. The King's unsuccessful effort to oppose the PM leads - as such efforts inevitably must lead - to his abdication and the accession of his son. Inevitably, of course, a similar outcome occurs in this drama, in which both the King and the heir are unambiguously identified with their real world equivalents.

The drama begins with the present Queen's funeral and highlights the palpable sense of widespread loss, a theme returned to at times throughout, as society tries to recover the anchor her steady reign provided. To be honest, at first I found the Shakespearian style (complete with soliloquies) awkward and distracting. These are, after all, contemporary characters - not figures from the Bard's history plays. Yet, while it may seem awkward - an affectation even - to dress the story up in Shakespearean language, in a weird way it works, which may suggest something about the time-transcending resonance of the subject.

As King Charles' refusal of the Royal Assent quickly unravels into a constitutional crisis unlike any since the Abdication Crisis of 1936 (the last time the Establishment had to rid the nation of an unsuitable monarch), the king himself seems to unravel, increasingly deluded about his role and haunted (literally) by his late wife. Charles grasps the truth that the monarch's vocation is to embody and defend the nation's deepest values, but completely misunderstands the institutional realities within which that calling is to lived and fulfilled.

It is said of the current Queen that she has never made a misstep in her role. That would be a very high bar for any future monarch to meet - especially one like Charles whom the public, after decades of negative press coverage, seems predisposed to expect to make mistakes. But it strains credulity to imagine him making the kind of mistakes that King Charles III portrays him making! As Italy's King Umberto II is alleged to have once told a British journalist, in the modern world a king must do what everyone wants him to do.

Italy's King Umberto might have saved his own throne had he confronted and challenged his elderly father instead of interpreting his dynastic duty as one of obedience and support in spite of everything. In King Charles III, William, the new Prince of Wales, starts out similarly unwilling to confront and challenge his elderly and increasingly out-of-touch father - unlike his wife whose intense ambition leads her to recognize more quickly what must be done. But when William does act at last, he acts decisively to force his father off the throne and thus restore the monarchy's bond with the people.

The Prince Harry sub-plot is entertaining but seems predictably formulaic. He is the playboy prince who wants the freedom of not being a prince - shades of Shakespeare's Prince Hal in Henry IV - who when the time comes rises to his responsibilities and leaves freedom behind for duty.

The story is well crafted and the drama well acted, and it ends as it must and should. Still, at what gratuitous cost to the real people being portrayed?

What is it about the present Prince of Wales and presumptive future king that the cultural elite takes such pleasure in treating him so scornfully? Ironically his long apprenticeship has, if anything, made him perhaps the best prepared sovereign-in-waiting in British history - in part because he has made good use of his time as heir apparent to engage with the contemporary world in constructive ways. In addition to doing lots of good works through The Prince's Trust, he has actually shown an interest in ideas and issues. Of course, that can get problematic, since expressing any opinion on almost anything is likely to annoy somebody - the very thing he must not do when he becomes king. But one does not necessarily have to agree with all his ideas or share all his interests to admire the fact that he actually has ideas and interests - beyond such traditionally respectable pursuits as shooting birds and riding horses.

That the real Charles survived an education ill-suited to his temperament is to his credit. That he has recovered as well as he has from a traumatically disastrous marriage to someone so totally unsuited to the role of Princess (and future Queen) as the woman whom he was pressured to marry also is to his credit. (Obviously it was better for all concerned - including the general public - when royals only married other royals, people who understood what was expected of them and generally tried to live up to those expectations. But that age is now gone, and all concerned must make do with our contemporary extravagant expectations about marriage.)

For a far fairer portrait of the actual man who may one day become king, I would recommend reading the latest - and likely best - biography of the present Prince of Wales, Prince Charles: The Passions and Paradoxes of an Improbable Life, by Sally Bedell Smith (Random House, 596 pp.).

Common sense and the wisdom of the ages teach us the absolute importance, if we humans are to flourish, of institutions and the restraints they impose. Common sense and the wisdom of the ages thus teach us to treasure those inherited institutions which have proven their worth over time. If anything, the crisis of contemporary culture (including the symptoms of that crisis which we are witnessing right now at the national level in our own country) should highlight for us what happens when inherited institutions and their values are frivolously devalued