May Day in the Shadow of Climate Change 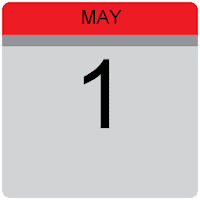 The strangely unpopular (if at the time well-intentioned) feast of Saint Joseph the Worker still clutters the liturgical calendar on May Day. It was famously invented by Pope Pius XII in 1955 (and so first celebrated in 1956) as a transparently unsubtle attempt to co-opt the widespread (especially in Europe) Communist and Socialist celebrations of May Day as the - by then - long established international holiday for workers. But it never seems to have acquired the popularity - among workers or anyone else - that it was probably intended to have.

The fact that it displaced the older (if still modern) feast of the Solemnity of Saint Joseph probably didn't help its cause among liturgical enthusiasts. Under an older title, the Patronage of Saint Joseph, a second feast of Saint Joseph (in addition to that on March 19) had been kept in the proper calendars of certain religious communities and other places. In 1847 Blessed Pope Pius IX extended it to the whole Church on the Third Sunday after Easter (in keeping with the then still strong tendency to assign various devotional feasts to Sundays). The same Pope proclaimed Saint Joseph Patron of the Universal Church in 1870.  As part of the opening salvo of the 20th-century liturgical reform, Pope Saint Pius X's rubrical and calendar reform of 1911 moved the new feast to the Third Wednesday after Easter and renamed it the Solemnity of Saint Joseph.  My guess is that liturgical enthusiasts probably preferred the texts of the 19th-century feast to the seemingly less inspired new ones created by the future Cardinal Bea, et al., during the deliberations of Pius XII's liturgical reform commission in the mid-1950s.

Given the contemporary near collapse of the labor movement, a new attempt to highlight the Church's commitment to the rights and dignity of workers would seem very desirable. However, whether the existing feast (now downgraded to the seemingly frivolous status of "optional memorial") can still serve that function - or even contribute to it in any meaningful way - is debatable at best.

Prescinding from all of that, there remain two other casualties caused by today's "optional memorial" - the unfortunate displacement of Saints Philip and James from their historically traditional date (first to May 11 by Pius XIII and then to May 3 by Paul VI) and the eclipse of the even more traditional May Day (not as a socialist celebration but as a traditional seasonal celebration reflecting our connectedness with and dependence upon the natural world).

As anyone who bothers to read this blog knows, every now and then (but especially around the time of the now defunct Rogation Days), I like to harp on our need to retrieve a serious sense of our connection with nature, something the liturgy traditionally maintained through such seasonally focused observances as Ember Days, Rogation Days, etc. It would certainly be a stretch to blame climate change denial on this aspect of the reformed liturgy. But certainly the reform's wholesale abandonment of those observances that traditionally marked the natural seasons and highlighted our human connection with and dependence upon nature have not helped the situation any! And, while it may be true that, even when we had Rogation Days, most people probably ignored them, it is also the case that most people probably ignore Earth Day, which is not usually advanced as an argument against Earth Day,

As the traditional beginning of the second half of the ancient European year, May Day is as old and venerable as its autumnal equivalent Halloween (the latter more successfully sanctified by the liturgy with All Saints and All Souls Days). With the unfortunate loss of April 25's "Greater Litanies" (a baptized version of that day's pre-Christian Roman Robigalia), there remains a real need for an explicitly religious parallel to Earth Day. Perhaps May Day could be creatively re-imagined as a kind of Christian Climate Concern Day (perhaps even as a fast day) in the spirit of Pope Francis' great encyclical Laudato Si'.
Posted by City Father