Back Together at Last 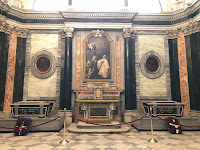 The mortal remains of Italy's third King, Vittorio Emmanuele III (1869-1947), who reigned from 1900 to 1846, and his Queen, Elena of Montengro (1871-1952) have been reunited at last - back together and reunited with Italy. Without fanfare, almost furtively, the two monarchs' bodies were returned to Italy and were reburied last month in the chapel of San Bernardo (photo) in the Santuario di Vicoforte in the Piedmontese province of Cuneo.

Queen Elena was reburied first, on December 15, returned to Italy from her resting place in Montpelier, France. Then two days later her husband was brought home from his tomb in Saint Catherine's Cathedral in Alexandria, Egypt. Unlike the king, whose legacy remains problematic, Queen Elena was widely beloved and respected all her life. At the time of her death, Pope Pius XII called her a "Lady of Charitable Work." In fact, the Queen had twice received the Golden Rose from Pius XI - in 1930 and again in 1937 - the only modern person I know of who received it twice in her lifetime.. (The only person to have received it more times was England's King Henry VIII - in 1512, 1521, and 1524. A lot of good that did!).

Known as il Re Soldato ("The Soldier King") for having led Italy during World War I, he was subsequently called il Re Vittorioso ("The Victorious King") after Italy's victory in that war, which wasn't much of a victory as it turned out, and which set the stage for Italy's - and the House of Savoy's - ultimate undoing in World War II. More derisively, he was widely known as Sciaboletta ("little saber") due to his diminutive (5-foot) stature. The trajectory of his reign could be said to have taken a wrong turn when he appointed Benito Mussolini to head the Government in 1922 and, for the most part, passively went along with Fascism at home and with Mussolini's disastrous foreign policy. Undoubtedly, there were many points at which things could have gone differently. Initially Mussolini's rule was well regarded by many outside Italy. He successfully sent troops to the Austrian border to prevent Hitler from annexing Austria in 1934. The conquest of Ethiopia, however, damaged Italy's relationship with the Western Powers and paved the way for the alliance with Germany, in which Italy became increasingly the very junior partner. Like many Italians, the King did not care much for the Germans. He certainly disliked Hitler when he came to Rome for a State Visit in 1938 (a dislike Hitler reciprocated). But he unwisely went along with the Declaration of War in 1940.

Even so, the monarchy remained a popular counter to Mussolini, who never enjoyed the absolute power Hitler did in Germany, The military, for example, swore allegiance to the Crown, not to Mussolini, and would probably have always supported the King had he moved against Mussolini earlier than he did. In the end, the King did act to remove Mussolini and realign Italy with the Allies in 1943, but he did so in a blundering and ultimately disastrous manner. The infamous fuga del Re - the flight of the King and the Government from Rome on September 8-9, 1943, leaving Rome effectively undefended from the Germans - has forever blackened his reputation. "What a spectacle," the King's son, the future King Umberto II, lamented as the royal family fled. When one Italian General realized that their flight was not to the hills but to the sea (so as to head south behind Allied lines), he supposedly said,"So far it has been a flight., Now it is an absolute betrayal."

Historians will continue to debate the pros and cons of the King's actions before and during the war. What is beyond doubt is that his stubborn refusal to abdicate in 1943, when virtually everyone wanted him to do so, undermined the dynasty's position in post-war Italian politics. During his almost two years as regent and his one month as King, Umberto II showed himself well suited to the demands of the job. Just as Mussolini would likely have remained in power and ended his days peacefully had he not entered the war, likewise Umberto II would likely have remained on the throne as a stabilizing force for post-war Italy had his father gotten out of the way and left the scene more quickly and with more dignity. The extremely narrow (and questionable) republican victory in the 1946 referendum not only highlighted Italy's persistent sectional (north vs. south) divide but also largely returned Italy to the dysfunctional political patterns that had paved the way for Mussolini's ascent in  the first place.

The monarchy was not the only counterweight to Mussolini. The Catholic Church had infinitely more charisma than the very uncharismatic "little king."  Even so, the monarchy deserved better than the fate it suffered from the post-war finger-pointing and virtue-signalling, to which admittedly it had become so susceptible thanks to Vittorio Emmanuele's personal failures as monarch.

As with so much of the legacy of the 20th-century's two terrible wars, it all could have ended better than it did. History happens, however, and once it has happened nothing can un-happen it.

At least the King and Queen are together again and together too with Italy, united as they were in life, for better or for worse.