Norwegians and Other Immigrants 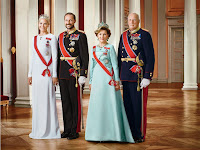 So accustomed have we become - thanks to HBO et al. - to uncivilized vulgar language in situations where it would not ordinarily be expected, it was inevitable that real life would soon start imitating the vulgar corrosiveness of cable TV language. Thus the foul-mouthed town mayor in season one of HBO's The Leftovers prefigured the real-life vulgarity of our current Head of State.

But beyond vulgarity, other questions clamor to be asked in the wake of the President's now infamous comment. How, for example, do we - and how should we - think and speak about problematic places in the world? Immigrants have come to our shores from all backgrounds, for all sorts of reasons, and from all over the world. But, at an given time in our national history, immigrants have been especially likely to have arrived from problematic situations in problematic places - for example, mid-19th-century Irish immigrants from famine-devastated Ireland, or late-19th-century East European Jewish immigrants evading Russian pogroms. The immigrant group I know the most about - Southern Italians - came in greatest numbers in the aftermath of the unification of Italy, when the only real solution the newly united Kingdom of Italy could offer to the predominantly poor population from southern Italy and Sicily was  immigration (whether to the US or to Argentina or wherever). Nor should anyone ever forget that, then as now, many of those immigrants were quite unwelcome by many of those already here, many of whom perversely identified America with their particular ethnic identity and who demeaned the places those immigrants came from (not unlike the attitude of our current President). In spite of that, immigrants from problematic situations in problematic places came and thrived in this country - as has continued to happen with more recent immigrants from the places the President insulted.

That said, another obvious next question is: why Norway? Why would anyone expect immigrants to come to the United States from contemporary Norway? The modern Kingdom of Norway became independent in 1905; but, as a nation, Norway has existed with a distinct identity since at least 872. According to the World Bank and the IMF, contemporary Norway has the 4th highest per capita income in the world. Its citizens enjoy social security and universal health care. Its government is considered one of the world's most democratic, and its people among the world's happiest.

So the obvious question becomes: if there were to be any significant amount  of contemporary immigration between Norway and the US, which would be the more problematic place? From which country's problems would immigrants seek to escape?