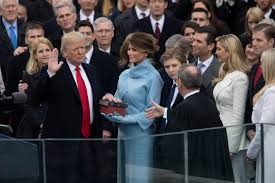 In a more normal time (which no longer exists and may never return again), the first anniversary of a presidential administration might be the occasion for a balanced assessment of the new president's accomplishments (or lack thereof). But, of course, these are not normal times, either for the presidency of for the country as a whole. In a more normal time, in a more normal presidency, the prospect of a government shutdown on the very eve of the administration's first anniversary would probably have been viewed as an appalling prospect (as indeed it should be). In the current climate, it is just part of the way things are now. The disgrace of Congress's unwillingness to fulfill its most fundamental responsibilities merits little more than a shrug.

As it has been experienced in this first year, the Trump presidency presents two particular types of problems, which invite two opposite responses. The first concerns the president in particular, his unconventional behavior, his seeming ignorance of and apparent indifference to traditional norms of democratic politics and the expectations of his high office, and the corrupting effect of all of this in terms of governance, democratic deliberation and debate, and the very existence of commonly shared standards or truth and political expectations. The almost inevitable response to this, of course has been an unrelenting preoccupation with the person of the President. with worry about his personality and/or opposition to him personally dominating the discussion - largely to the neglect of a preoccupation with his and his party's policies.

The second problem, however, concerns precisely those policies - more precisely how this President has empowered his party's destructive political agenda, some of which (deregulation, hostility to immigrants, etc.) has already been successfully implemented.and more of which (e.g., attacks on Medicare and Medicaid) ominously threatens. The right response to all of that, of course, should logically be a focus precisely on those policies and a strategy to disempower their policymakers. The problem is that the two responses conflict with one another.

President Trump's behavior has been both offensive and erratic. That has gotten in the way of his being the post-partisan "populist" alternative to our stagnant "establishment" politics that some hoped he might be. Instead, he has largely empowered his party's political agenda, which is anything but "populist."

As David Leonhardt noted in Friday's NY Times, the danger with an obsessive preoccupation with the President himself, with his personality and with his problematic behavior, is the resulting disappearance of the necessarily intense focus on the harm his party's policies are actually doing. Leonhardt cites Luigi Zingales' comparison of Trump to Italy's former Prime Minister Silvio Berlusconi: "The Italian opposition, Zingales wrote, 'was so rabidly obsessed with his personality that any substantive political debate disappeared; it focused only on personal attacks, the effect of which was to increase Mr. Berlusconi’s popularity. His secret was an ability to set off a Pavlovian reaction among his leftist opponents, which engendered instantaneous sympathy in most moderate voters. Mr. Trump is no different'.”

Leonhardt argues that, just as Berlusconi’s opponents did better when they treated him as a normal politician and criticized him on substance (because Berlusconi’s actually agenda was unpopular), so too the opposition would do better by focusing on policy issues that could win over certain voters. "A focus on economic issues will almost certainly be more effective than a focus on personality. But the question isn’t just personality versus policy. It’s also which kinds of policy Democrats emphasize. And economic issues are much more likely to be effective than cultural issues, even if Democrats rightly feel passionate about cultural issues like immigration and Trump’s racism."

As we begin the second year of the Trump presidency, that sounds like advice his opponents need to take very seriously if their goal is actually to make political change rather than merely make noise.