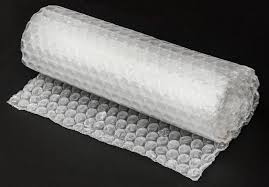 The last Monday in January is - believe it or not - Bubble Wrap Appreciation Day! The story is that, when some radio station in Bloomington, Indiana, received a shipment of microphones wrapped in bubble wrap, the sound of the wrapping being "popped" (something some people really enjoy doing with Bubble Wrap) was inadvertently broadcast. The story certainly seems silly enough to be true - silly enough too to create a special day to commemorate it!

Bubble Wrap the trademarked name of the plastic material widely used for wrapping and packing fragile items, its characteristic air-filled bubbles creating a cushioning  effect. Apparently its inventors had other uses in mind but discovered its superior virtues as a wrapping and packing material. But, because the bubbles make a nice popping sound when squeezed and broken, it has since found additional uses used as a plaything - and stress reliever. Supposedly, Sealed Air (the company that owns the trademark) may be making an alternative wrap that does not pop. Why? Why take the fun out of unwrapping packages?

Certainly Bubble Wrap  is good at what it does. And, if it adds a little amusement to our ordinary lives by being popped, so be it. No harm done! But really what more is there to say? What more does anyone need to say? What more should anyone want to say?