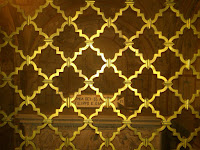 Today is the (twice-in-my-lifetime) reassigned feast of the Apostles Philip and James. Traditionally celebrated on May 1, the anniversary of the dedication of the Roman church dedicated to them (now known as the Church of the Twelve Apostles, the traditional stational church on the four Ember Fridays) their feast migrated to May 11 in the mid-1950s and then to May 3 in the 1969 calendar. (Photo: The Tomb of the Apostles Philip and James in the Roman of the 12 Apostles.)

The first move was necessitated by the invention of the feast of Saint Joseph the Worker, a spectacularly unsuccessful attempt to co-opt the popular Communist May Day holiday.  The liturgical costs of creating this new feast not only included the displacement of the Apostles from their traditional day (which they still occupy in the Anglican Book of Common Prayer) but also the abolition of the 19th-century feast of the Patronage of Saint Joseph, originally celebrated on the 3rd Sunday after Easter and then moved by Pius X's reforms to the 3rd Wednesday after Easter. (Pope Pius IX had declared Saint Joseph the Patron of the Universal Church in 1870.) While a modern feast, its Mass and Office were nonetheless held in somewhat high regard by liturgical experts - especially in comparison with the lesser esteem in which the texts of the newer 1950s feast came to be held.

Then the 1960 rubrical reforms eliminated the long established feast of the Finding of the Holy Cross on May 3, a Gallican feast dating from about the 7th century which 20th-century reformers saw as an unnecessary or undesirable duplication of the even more ancient September 14 feast of the Exaltation of the Holy Cross. So, when the 1969 calendar reform set about rearranging any number of feast days, the temptation seems to have proved irresistible to move SS. Philip and James again - this time to the now empty May 3 date, which is at least closer to their traditional day.

According to the New Testament, Philip (along with the brothers Peter and Andrew) was a disciple from Bethsaida in Galilee. John's gospel presents him as one of the Baptist's disciples and the one who introduced Nathaniel to Jesus. He was also the one some Greek-speakers sought as an intermediary to meet Jesus. And at the Last Supper it was he who famously asked Jesus to show them the Father.
James, on the other hand, is a somewhat more elusive figure. He is referred to sometimes as "James the Less" - to distinguish him from the James who is associated with Peter and John in the Gospels as one of Jesus' closest disciples and who was the first of the 12 to be martyred. He is usually identified with James, the son of Alphaeus and, at least in the Western tradition, with "James the Just," the "brother of the Lord," leader of the post-Pentecost Christian community in Jerusalem, and author of the Epistle of James. The Lectionary oddly seems to downplay the latter connection by using a Pauline epistle at Mass, although the former Breviary did at least specify that the Letter of James be read from in the old 1st Nocturn.
Yet what could be more fitting for May Day than the Letter of James? It is that Epistle which offers a pointed Christian critique of wealth - and of the ever-present temptation of favor the rich.

In The Theory of Moral Sentiments (chapter 3) Adam Smith (1723-1790) famously warned:
This disposition to admire, and almost to worship, the rich and the powerful, and to despise, or, at least, to neglect persons of poor and mean condition ... is, at the same time, the great and most universal cause of the corruption of our moral sentiments. That wealth and greatness are often regarded with the respect and admiration which are due only to wisdom and virtue; and that the contempt, of which vice and folly are the only proper objects, is often most unjustly bestowed upon poverty and weakness, has been the complaint of moralists in all ages.
Saint James would surely have agreed:

My brethren, show no partiality as you hold the faith of our Lord Jesus Christ, the Lord of glory. For if a man with gold rings and in fine clothing comes into your assembly, and a poor man in shabby clothing also comes in, and you pay attention to the one who wears the fine clothing and say, “Have a seat here, please,” while you say to the poor man, “Stand there,” or, “Sit at my feet,” have you not made distinctions among yourselves, and become judges with evil thoughts? Listen, my beloved brethren. Has not God chosen those who are poor in the world to be rich in faith and heirs of the kingdom which he has promised to those who love him? But you have dishonored the poor man. Is it not the rich who oppress you, is it not they who drag you into court? Is it not they who blaspheme the honorable name which was invoked over you? (James 2:1-7).

Wouldn't that be be an especially appropriate reading for May Day! Or any day!