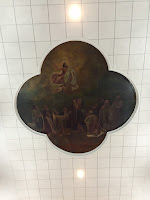 St. Bernard of Clairvaux [1090-1153] is supposed to have described the Ascension as “the consummation and fulfillment of all other festivals, and a happy ending to the whole journey of the Son of God.” Back where I came from, Ascension is still celebrated on its own day, last Thursday. So, there, one is still greeted in the morning by the local news’ announcement that in the entire city what is called “alternate side of the street parking” is suspended because of the holyday. It’s even better in parts of Europe where Ascension is a legal holiday and where even the Stock Market is closed in observance of Ascension.

Growing up, of course, what we so especially liked about the Ascension was that we got off from school! But, of course, we had to go to Mass in the morning, and at least some of us really looked forward to the wonderful ritual of ceremonially extinguishing the Easter Candle – the symbol of the Risen Christ’s presence among us – after the reading of today’s Gospel. The point of that, of course, was not just Christ’s departure, but also the new way he is now present to us. As the Church prays in the Preface of today’s Mass: he ascended, not to distance himself from our lowly state but that we, his members might be confident of following where he, our Head and Founder, has gone before.

If you look up, just like the apostles in the story, you can see in the center of the ceiling a painting of the Ascension [photo], one of three ceiling paintings that are all that is left of a number of such paintings that were attached to the ceiling and walls of this church by a group of itinerant artists a century ago. When we replaced the ceiling in 2013, there was a lot of anxiety about preserving those paintings, and we brought in an expert from Pellissippi State College to examine and clean them. I even climbed the scaffolding myself one day just to say that I had touched one of the paintings. (I could still do that then, although I doubt my knees would let me do that now!)

Historically speaking, Ascension commemorates the last of the Risen Lord’s appearances to his disciples in the weeks after his resurrection. The Risen Jesus no longer walked earth the way he did before he died and rose, but he did, as Luke says in today’s 1st reading, appear a number of times to his disciples during that post-Easter period of 40 days [Acts 1:1-11], speaking about the kingdom of God.

So, now, if Jesus doesn’t walk the earth as he did before, where exactly is he? Theologically speaking, the Ascension celebrates what we profess every Sunday in the Creed, that he is seated at the right had of the Father, where, as the letter to the Hebrews assures us he lives forever to intercede for us [Hebrews 7:25; cf. Romans 8:34].

On the Mount of Olives in Jerusalem, pilgrims can see a footprint-like depression in a rock, which purports to be the spot from which Jesus ascended into heaven. The footprint and the idea that the pushed off with such force that he left a footprint in the rock may be a bit fanciful, but it does make the important point that it is Jesus’ real human body (and thus the real human nature that we share with him) that is now with God. So the Church prays today in the Eucharistic Prayer, he placed at the right hand of your glory our weak human nature, which he had united to himself.

So the Ascension anticipates what the resurrection has made it possible for us all to hope for. Meanwhile, in this interval between Ascension and the end - a time full of problems and challenges of every sort, of crises and conflicts in the world and even in the Church, not to mention all our own personal problems and worries - in this interval between Ascension and the end, the Risen Lord remains with us though his gift of the Holy Spirit. Far from being absent, Jesus, who lived and died and now lives again forever with his Father, is still very much present among us by the power of his promised gift of the Holy Spirit, who is always at work in the Church, through which we remain connected with him, so that, through us, he can continue his work of transforming our world. Again, as Pope Francis, has recently reminded us: “In the Church, holy yet made up of sinners, you will find everything you need to grow towards holiness” [GE 15]

Homily for the Ascension of the Lord, Immaculate Conception Church, Knoxville, TN, May 13, 2018.