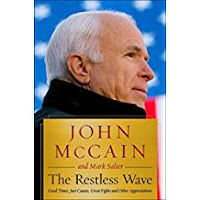 The Restless Wave: Good Times, Just Causes, Great fights, and Other Appreciations (Simon and Schuster, 2018) is Senator John McCain's latest (and presumably final) political/personal memoir, co-authored with McCain staffer Mark Salter, who has collaborated with McCain on several books. (The book's title is taken from the Navy Hymn: Eternal Father, strong to save, Whose arm hath bound the restless wave.)

I have never voted for McCain and can't imagine any circumstance in which I would likely do so. Nor have I ever read any of his previous books. In our present, polarized, hyper-partisan political culture that would normally be a reason not to read such a book.  It is a tribute, perhaps, to McCain's personal and political impressiveness, to what his personal and political character have represented - or at least to what he has at his best wanted to represent - that this is just the sort of book that one should be reading right now as a partial antidote to our poisoned, hyper-partisan political culture. Whatever his other qualities or faults, McCain, in terms of his personality and character, manifestly represents the antithesis of Donald Trump.

For McCain, "among the few compensations of old age is the acuity of hindsight," and it is in that spirit that he tries to recount key chapters in the last decades of his career. Of course, there is the story of the 2008 campaign. He still defends Sarah Palin and her selection as his running mate (a choice some would argue helped move his already problematic political party even further along the destructive road to where it is now). Even so, he highlights his original preference for Democrat Al Gore's 2000 running mate, fellow Senator Joe Lieberman, who was both a friend and "shared the same worldview and concerns." Having been dissuaded at the time from choosing him as a running mate for fear of dividing the Republican party, he says he still wishes he had done so, still believes "that a McCain Lieberman ticket would have been received by most Americans as a genuine effort to pull the country together for a change."

That more or less captures much of the book's spirit - a flare for independence (his famous image as "maverick"), his ambivalent relationship with his own party, his openness to working with Democrats, and his commitment to a politics that is different from what we have now (but in some ways more reminiscent of what it once was earlier in his career). He emphasizes his opposition to torture, his advocacy of the "surge" in Iraq, his take on the problematic "Arab Spring," his fight for campaign finance reform (and his negative view of Citizens United and the Court that unwisely decided it), his commitment to comprehensive immigration reform, his strongly interventionist foreign policy positions (so different from both Obama and Trump, both of whom represent the  semi-isolationist wings of their respective parties), especially regarding Vladimir Putin and Russia's "nostalgia for empire," the importance of long-term commitment to what he understands as fundamental American values in foreign affairs, and finally his own battle with cancer.

Of particular interest are his assessments of Hillary Clinton, whom he had gotten to know and work with in the Senate and whom he calls his friend, Barack Obama, whom he respects on various levels but whose foreign policy he found flawed, and Ted Kennedy, with whom he had an almost model, bipartisan relationship, personally and politically.

Those personal relationships reflect his commitment to a more traditional congressional style. Speaking of the Senate's 2006 immigration bill, which passed with 62 votes (38 Democrats, 23 Republicans, 1 Independent), he says: "It was major legislation passed the only way most major legislation is ever passed: with a broad bipartisan majority built on compromises both sides could live with and good faith on the part of the senators most involved." He believes that the current political dysfunction is "getting little done for the country, which exacerbates voters' alienation from Washington, which encourages them to elect more people to Washington determined to stop any compromise, and block genuine progress on anything."

On immigration specifically, he attributes the failure to achieve comprehensive immigration reform "to the misinformation and downright lies that enflame opponents, which have only gotten more pervasive and more inflammatory over the last decade."

The public is already largely familiar with McCain's positions on bipartisan cooperation and getting things done through "regular order," but his insistent advocacy of them at this point as part of his final legacy may be his most significant contribution to that cause.

in conclusion, he celebrates " a happy life lived in imperfect service to a country made of ideals, whose continued success is the hope of the world."