"The Birthday of the Church" 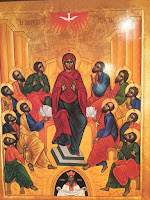 This year, the Jewish and Christian calendars coincide, much as they did then, when (according to the Gospel of John) Jesus was crucified on the eve of Passover (14 Nisan). Just as Good Friday fell again this year on Passover eve, Shavuot and Pentecost likewise coincide this year, both occurring today, Sunday, May 20, which makes this a good occasion to recall and highlight the connection between them.

Pentecost is a Greek word referring to the 50th day – originally the 50th day (the 6th day of Sivan, the 3rd month) after Passover and in Christian usage the 50th day of Easter. Its Hebrew name, Shavuot, means “weeks,” a reference to the seven weeks that began with Passover. Shavuot was the second of the three great pilgrimage feasts in the Jewish calendar and originated as a joyful thanksgiving for the early summer harvest, when two loaves, made from new flour, would be offered to God as the first fruits of the grain harvest. To commemorate this, Jews now eat two meals on the day of Shavuot — an earlier dairy meal, and then later a festive meat meal.


Over time, Shavuot became primarily a commemoration of the giving of the Torah at Mount Sinai, which (according to Exodus 19) happened early in the 3rd month, seven weeks after Israel’s escape from Egypt. Recalling this, on the first night of Shavuot (this year, Pentecost eve), Jews throughout the world keep an all-night vigil dedicated to receiving the Commandments anew. The Book of Ruth is read. Ruth, of course, was King David's grandmother. She was also originally a Gentile.

The modern Roman Missal provides for a Pentecost Vigil, an option which is, I suspect, seldom used. In the early Church, however, Pentecost paralleled Easter as a baptismal feast. Out of that evolved a Vigil liturgy on Saturday morning, which (until its abolition in 1955) replicated much of the traditional Holy Saturday morning rite. Celebrated in violet vestments, it began with repeating 6 of the 12 Holy Saturday prophecies and the blessing of the baptismal font, followed by the Litany of the Saints, all just like on Holy Saturday. The vigil concluded with a festive Mass (in red) which anticipated Pentecost, just as the Easter Vigil seven weeks earlier had concluded with a festive Mass anticipating Easter. All that is gone now, of course, along with the Pentecost Octave that previously paralleled the Easter Octave.

Just as summer fulfills the promise of spring, the giving of the commandments fulfilled the promise of nationhood, of which the exodus event itself had been but the beginning and of which David's kingdom would be the flowering. So too, the gift of the Holy Spirit at Pentecost fulfilled the promise of the resurrection, transforming the disciples from frightened friends of an absent Jesus into faith-filled witnesses testifying to the whole world, Gentiles and Jews alike.

Pentecost is often called “the birthday of the Church,” since it was as a direct result of their having received the gift of the Holy Spirit during the festival of Shavuot that followed Jesus’ Ascension that the apostles began their mission – the Church’s mission – of preaching the Gospel to the whole world - thus fulfilling and completing the promise of Easter and carrying it out into the world of day-to-day life and work.

Liturgically, Pentecost marks the transition from Easter Time to Ordinary Time – the time of fulfillment, the time of the Church, when the promise of the resurrection takes effect in daily life. Just as the new life promised by spring continues into summer, the new life promised by the Risen Christ continues in our world in his Church. In that sense, Pentecost is the annual liturgical observance of what happens every week with the transition from Sunday to Monday. From our Sunday celebration around the unleavened bread which has become the body of our Risen Lord, we are sent forth, to renew the face of the earth as one body and one spirit in Christ, as the Risen Lord’s permanent presence in the leavened bread of our daily lives in the world.