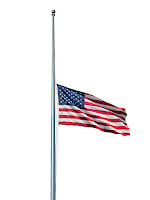 “America is never wholly herself unless she is engaged in high moral principle,” President George H.W. Bush told the crowd at his Inauguration on January 20, 1989. “We as a people have such purpose today. It is to make kinder the face of the nation and gentler the face of the world.” Can anyone imagine the present President or a member of his political party saying something similar today?

I never voted for either President Bush, and have on occasion observed that, if our first father-son pair of presidents, the Adamses, might cautiously be invoked (in retrospect) as an argument in favor of hereditary monarchy, the same can hardly be said for the second pair.

But, if the monarchical argument fails, what of the aristocratic one? At the the time of the 1988 election, a former graduate school colleague told me that he had voted for George H.W. Bush because of his background, his (by American standards) aristocratic breeding, and the sense of serious civic responsibility presumed to accompany such a background. Given the malicious "Willie Horton" and "Pledge of Allegiance" campaign against Governor Michael Dukakis, I was personally unpersuaded at the time.

But no one can doubt that the flip side of American egalitarianism has been a certain appreciation for the virtues of social and civic responsibility that used to be bred into our patrician elites and which have served this country well on multiple occasions - from the two Adamses to the two Roosevelts. Hence, the famous story of Ohio Senator Robert A. Taft's wife's response when asked if her husband was a "common man." "Oh no," she replied. "He was first in his class at Yale and first in his class at Harvard Law School. I think it would be wrong to present a common man as a representative of the people of Oho."

Like all social arrangements, aristocracy has its genuine and admirable pluses (if also some serious minuses), and undoubtedly President George H.W. Bush exemplified many of those pluses - all the more so in retrospect, when compared with the present President and his political party. Bush embodied that classical combination of traditional, understated patrician modesty with actual accomplishment. He served with distinction in war and in a series of serious political positions, among them Ambassador to the UN, Director of the CIA, and Envoy to China.  An excellent resume only gets one so far in politics, however. Hence, he failed to win his party's presidential nomination in 1980. But his resume undoubtedly helped push him into the vice presidency, from which he went on to accomplish the relatively rare feat of getting elected president directly from the vice presidency in 1988. Since the passage of the 12th Amendment, only Martin VanBuren and George Bush have succeeded at this!

We rate past presidents through the prism of the present - one reason that historians' evaluations of individual presidents keep changing. Undoubtedly, the reputation of our last one-term president is justifiably higher today than at the time of his defeat in 1992.

As president, Bush governed better than many might have expected, and left a legacy more valued in retrospect. Notably, he deftly managed the end of the Cold War and put together an impressive international coalition to undo Saddam Hussein's aggression against Kuwait. In both cases, he showed admirable restraint where others might have swaggered and blustered. Domestically he signed the Americans with Disabilities Act, and his 1990 budget deal helped fix the economic mess he had inherited from Reagan. It was, however, his deviation from the religion of Reaganism, breaking his infamous "no new taxes" campaign promise, that earned him the ire of Republican Reaganite ideologues - a foreshadowing of the incompatibility between traditional responsible governance (on which the patrician elite so prided itself) and the contemporary permanent partisan campaign. It was his misfortune that this coincided with a recession. It was the country's misfortune that his party interpreted his loss because of the recession as instead a repudiation of him for his having broken his earlier "no new taxes" promise.

As Geoffrey Kabaservice has noted: "Bush lost primarily because he seemed unresponsive to public anger over the economic slowdown and because his campaign veered too far to the right for the liking of an overall moderate electorate. The lesson that most Republicans drew from the election, however, was that Bush had committed political suicide by raising taxes in 1990 and alienating the conservatives who arguably comprised the party's base." [Rule and Ruin: The Downfall of Moderation and the Destruction of the Republican Party, from Eisenhower to the Tea Party (Oxford U. Pr. 2012), pp. 374-375].

The historical consequences for the Republican party have been a straight line to where it is today.  As a society, we have witnessed - and been accomplices in -  what Peter Baker in last Sunday’s NY Times fittingly called. “the fading of an approach to public life overtaken by the politics of anger, grievance and polarization.”

Like John Adams, Bush left office unpopular, but lived long enough to be appreciated for the larger story of his life. His post-presidency saw him team up with the man who had defeated him. When he and Bill Clinton partnered to do good together, he famously explained, "Politics does not have to be mean and ugly" - a stereotypically gentlemanly, aristocratic sentiment if ever there was one!

Since Plato, aristocratically oriented political thinkers have warned against the dangers of democracy, in particular democracy's power to produce - and reward - rulers like Trump. More than nostalgia is needed to reverse course, however, if indeed the course can be reversed at this point. Patrician civic mindedness presupposes all sorts of social structures and institutions (among them strong family structures and elite educational institutions), the weakening of which has exacted a heavy toll from our society. More has been lost than just good manners, and more will be required than merely relearning some good manners (although that obviously would be a good place to start). The fact is that good manners do not and by themselves cannot create a healthy civic culture.  Rather good manners are themselves a product of such a culture.

Neither, however, should it be forgotten that the first President Bush was not just an elite, Yale-educated, Senator's son. He was also a veteran of combat in World War II - something he shared with so many of his generation, an experience which created a national community of shared values across class and other obvious divisions. Bush was the last "Greatest Generation" President. With him passes one of our last links to the sense of unified national purpose that not only led to victory in war but also set a distinctive tone to the post-war period - a period of some 20 years of steadfast progress on almost all fronts. It is not just Bush's patrician manners and sense of noblesse oblige that we may miss. It is also that shared sense of national unity and common purpose, forged in war and central to the post-war world, that we now so desperately miss even more.

Bush famously called for "a kinder, gentler America" - "kinder" and "gentler" presumably than the direction the country had been headed since 1980, "kinder" and "gentler" by far than the direction his political party has taken our country since then. Ultimately, however, kindness and gentleness are not primarily political virtues but human ones. Politics cannot make us "kinder" or "gentler." Rather, it is kindness and gentleness in people that can transform our politics. In his personal and family life, Bush exemplified some of those qualities, those pre-political virtues, that our obsessive politics needs but so tragically seems to lack today. The virtues of his personal and family life were perhaps best exemplified in his 73-year marriage. I can think of few more admirable lessons his life leaves us with than that of his marriage - such an antidote to the tragically diminished position of marriage in the experience and expectations of subsequent generations.

And he wrote letters - real letters, by hand! In the wake of his death, attention is being paid to his wonderful final letter as president, left in the Oval office for the man who had defeated him, Bill Clinton. It is a fine letter, well worth quoting. So is another letter sent to one of his granddaughters some two decades ago: “I believe I was right when I said, as president, there can be no definition of a successful life that does not include service to others,” Bush wrote. “So I do that now, and I gain happiness."

And that sums up the seriousness of that generation and the ensuing happiness that now so painfully eludes contemporary America! 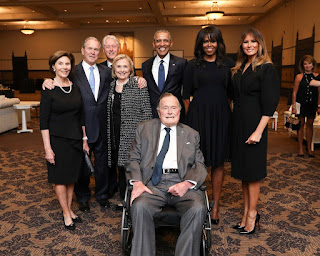