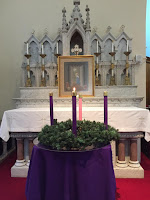 One of the constants in human – and especially American - history has been the periodic appearance of movements and people preparing for some sort of impending calamity, real or imagined, including even the end of the world. Usually they are fringe groups at the margin of mainstream society, although sometimes such anxieties are more reality-based and more widely shared. I think back, for example, to the fallout shelter movement in the early 1960s, which was actively promoted in New York where I lived by no less mainstream a person than Governor Nelson Rockefeller, and which was also taken seriously and discussed within the Kennedy Administration, as well as in the pages of the weekly Jesuit magazine America.

A few years ago, I was watching a TV interview with someone who was stocking up on supplies in anticipation of the cosmic calamities predicted to occur at the end of 2012. What struck me most at the time was how both the one being interviewed and the one doing the interview kept referring to the imminent disaster as “the end of the world.” Well, obviously, if you are stocking up on supplies, then you must expect – or at least hope - to survive the disaster, in which case, whatever else it may be, it is not quite “the end of the world.”

One could, of course, talk that way and mean not total destruction or even the end of all human life on earth. One could mean just the end of civilization as we know it, which is often what disaster scenarios are actually about. Apparently an actual end of the world may be more than even disaster-fans really care to contemplate. Add to that scary scenario the prospect of divine judgment, and then we’re getting into some really seriously scary stuff! So it is no surprise that the early Christians prayed, in Tertullian’s famous phrase: “for Emperors, their ministers, for the condition of the world, for peace everywhere, and for the delaying of the end.”

To us today, living in a world that is at least as dangerous and disorderly as that of the early Christians, if not more so, and where we hear right away about every terrible thing that happens almost anywhere in the world, to us that sounds like a familiar enough list – except for the final petition, which we seldom give much thought to, even while we pray every day at Mass for the coming of our Savior Jesus Christ.  Yet that “end” is precisely what the Church calls on us to contemplate today, as indeed we do every Advent.

Dies irae, dies illa, solvet saeclum in favilla: teste David cum Sibylla. O day of wrath, O dreadful day, when heaven and earth shall pass away, as David and the Sibyl say. So begins one of the most famous medieval liturgical hymns, composed by one of the early Franciscans in the 13th century.  When I was young, before our feel-good therapeutic culture took over and ruined funerals with eulogies and feel-good songs, those somber words of that medieval hymn were sung at every Catholic funeral. Actually, however, the Dies Irae began its life as an Advent hymn. Advent acknowledges the fear that people have always felt about what lies ahead. As Jesus himself said in today’s Gospel, People will die of fright in anticipation of what is coming upon the world. [Luke 21:26].

Advent originated, after all, as an annual period of repentance focused on preparation for Judgment Day, and the Dies Irae’s somber sentiments served to concentrate people’s attention on Christ's final coming at the end of time as judge of all the world.

Recent events have highlighted how dangerous our world is. We hardly need Advent to warn us of what is coming upon the world. Advent, however, is also about hope, a hope that comes from our memory, the lesson learned from Christ’s first coming into our world, two millennia ago. And the same Jesus who assumed our human nature and became part of our world, himself has invited us to look forward to his final coming with hope, telling us when these signs begin to happen, stand erect and raise your heads because your redemption is at hand.

Actually, Advent is about both fear and hope – both the end of this world and the coming of God’s kingdom, both the passing of another year and our hopes for a new and better one, both the darkness of our world and the living light of Christ coming again to make everything bright and new,

That, of course, is why we don’t celebrate Christmas in June, when the sun is high and the days are bright. We celebrate it now, when the days are dark and the nights are long, when we must search in the darkness to recognize the bright light of God’s kingdom coming into our world. In the dark winter night, full of fear, danger, doubt, and anxiety – in the long night of the present – between Christ’s first coming and his hoped for final advent, Jesus bids us: Be vigilant.

There is plenty of darkness to go around, and there is certainly plenty to worry about this year – as in every year.  . We all have our painful memories of personal failures, lost opportunities, unfulfilled longings, and ruptured relationships - all of which seem to haunt us even more intensely at this time of year. And then there is the worldwide darkness of our anxious, conflicted, war-ravaged time. Jesus was born in an anxious and conflict-filled world. He himself was born homeless and spent part of his childhood as a political refugee. Then as now, people were on the lookout for something or someone - in their case, so they hoped, the Emperor Augustus - that could make things right, or at least make a difference. Then as now, such pagan solutions proved temporary stopgaps at best, illusions at worst. Not for nothing did the psalmist pray: put not your trust in princes, in mortal men in whom there is no salvation [Psalm 146:3]. In the midst of so much darkness, Advent challenges us to recognize God's solution - the coming of Christ bringing light into anxious lives and a worried world.

In the words of the Paulist Fathers’ founder, Servant of God Isaac Hecker, the bicentennial of whose birth we will be commemorating throughout the coming year: There is little or no hope at all of our entering into the kingdom of heaven hereafter, if we are not citizens of it here. If Christ is to be to us a savior, we must find him here, now, and where we are; other wise he is no Christ, no Saviour, no Immanuel, no “God with us” [Questions of the Soul, 1855].

Advent is our annual, winter wake-up call to face up to our responsibility to live our lives like people whose God really has come. And, if God’s coming into our world means anything at all, it has to mean a change so thorough that nothing should ever be the same again.