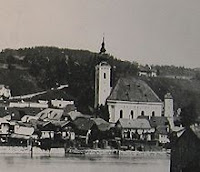 It was on Christmas Eve 1818, exactly 200 years ago, that the familiar Christmas carol Stille Nacht, heilge Nacht (“Silent Night”) was sung for the first time in the Austrian church of St. Nicholas in Oberndorf bei Salzburg (photo). The parish priest, Rev. Joseph Mohr, had composed the words, which his good friend, Franz Gruber, a schoolteacher and church organist then set to music. According to the familiar account, the main church organ was not working; and so, with Father Mohr singing and Gruber playing the guitar, the two introduced “Silent Night” to the congregation at Christmas Midnight Mass.
The carol became an immediate sensation. Since then, it has been translated into some 300 languages. In World War I, the carol was sung by soldiers on both sides during the famous 1914 “Christmas Truce.” During World War II, British Prime Minister Winston Churchill joined President Franklin D. Roosevelt in singing it with the crowd gathered for the lighting of the White House Christmas Tree on Christmas Eve 1941. Fans of Downton Abbey, will also recall the “Christmas 1924” episode when Lady Mary Crawley sang it in the translation then common in Britain. 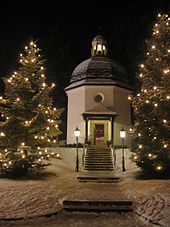 The rest of us, of course, sing it each in the more familiar translation, we all know and have come to love.


Oberndorf’s old Saint Nicholas Church was severely damaged by flooding of the Salzach River in 1899, which led it its replacement in 1906 by a newer church in the new town center and its demolition In 1913. After the First World War, however, there was an increasing desire to commemorate the carol’s origins. The present Silent Night Memorial Chapel (photo) was built on the original site and dedicated in 1937. Each year, a special Christmas Mass is celebrated at which Silent Night is sung in many languages.


In this 1953 newsreel, children gather at the grave of Franz Gruber in Oberndorf bei Salzburg, Austria. They then sing his immortal Christmas song, 'Silent Night, Holy Night' inside the Silent Night Chapel.  Go to:
https://www.youtube.com/watch?v=5WZXol692Jo