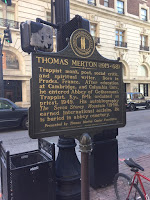 Today is the 50th anniversary of the untimely death of Fr. Mary Louis, OCSO,  better known by his secular name, Thomas Merton, undoubtedly the most famous and influential 20th-century American monk. (The mere notion of a famous and influential 20th-century American monk itself speaks volumes!) Born in 1915, young Merton lived an interesting life on both sides of the Atlantic, after which Merton was received into the Church 80 years ago, on November 16, 1938. A few years later, after a few more twists and turns, he entered the Cistercian monastery at Gethsemane, Kentucky, on December 10, 1941.  (With typical triumphalist hyperbole, he had called Gethsemane "the center of America" when he first visited there in April of that year.) Admitted to the novitiate the following year, he professed solemn vows in 1947 and was ordained a priest in 1949.

Had he been just an ordinary monk, the wider world might never have heard from him again. But being no ordinary monk, Merton meanwhile authored some 70 books and numerous articles - at times a widely welcomed part of the era's triumphalist Catholicism that he had enthusiastically embraced, and at other times challenging that same triumphalist (and complacent) Catholicism and pushing both the Church and religious life in new directions, addressing the world beyond the cloister on such sensitive subjects as race and war, as well as on more conventionally spiritual and Catholic concerns.

In my high school years in the early 1960s, I spent a lot of time in the public library. The plus side of that was that I really read a lot – history and biography, in particular. It was at this time that I discovered Thomas Merton – not just his famous autobiography, The Seven Storey Mountain (1948), but also his monastic journal The Sign of Jonas, which I read and reread and which so many decades later still remains my favorite Merton book! At the time, I was thoroughly taken with Merton’s life story, his spiritual journey (although I am sure I would not have used such a term then) from agnostic secularism to the certitudes of mid-20th-century Catholicism, and also by Merton's somewhat romanticized depiction of his monastic vocation (part of that time's triumphalist Catholic culture which he had embraced and which I then simply assumed as a given).

Although the NY Times excluded it from the weekly best-seller list on the grounds that it was "a religious book," the original cloth edition of The Seven Storey Mountain sold over 600,000 copies in the first year alone. Since then it has sold multiple millions of copies and been translated into more than 20 languages. It is, therefore, a "classic" (defined by Merton's friend Mark Van Doren as "a book that remains in print"). Graham Greene called it "an autobiography with a pattern and meaning valid for all of us." It was certainly that for me, however limited my understanding of it when I first read it as a teenager. But that is the thing about Merton: the more mature one's understanding of his writing the more attractive and aspirational it becomes.

In The Seven Storey Mountain, Merton recalled purchasing a “set of four books, bound in black leather, marked in gold.” That purchase of the 4-volume Breviarum Romanum during the period between his conversion and his actual entry into the monastery, represented his decision “that if I could not live in the monastery, I should try to live in the world as if I were a monk in the monastery.” Of course, in the end Merton did become a monk. In imitating Merton by buying myself a Roman Breviary in 1968, consciously choosing to do the same thing that he had done (or at least something similar), did I too hope that something similar might someday happen to me?

Merton himself had not been not much older than I was when he made that decision, but he certainly had had much more experience of life. He was also much more widely and better educated and culturally engaged, all of which was the intellectual foundation that made possible both the quantity and quality of his enormous literary output as a monk, which - refined in the unique experience of his monastic vocation - spoke (and amazingly still speaks) to the world with a relevance few "spiritual" authors attain to.

As for me, in 1968, I had only the most minimal intellectual and cultural foundation. Obviously I could not hope ever to imitate Merton's literary output and cultural influence. I could barely imitate him in his spiritual aspirations. Also my Latin was minimal, hardly up to the challenge of reciting – let alone, properly praying – the Divine Office, as Merton regularly did while commuting to his pre-war teaching job. Fortunately for me, however, by this time priests in the United States were permitted to pray the Office in English; and the pre-conciliar simplification and codification of the rubrics had shortened the Office somewhat and so had made it feasible to print the entire Office in one Roman Breviary volume.  So it was that single English-language volume of the Church’s official prayer that I purchased for myself, in my modest effort to imitate Merton and maybe in some confused manner to follow him on his journey.

“The inspiration to do it,” Merton wrote, “was a very great grace.” He said he could remember few things that gave him more joy.  It drew him “into that atmosphere, into that deep vast universal movement of vitalizing prayer, which is Christ praying in men to His Father.” That "movement of vitalizing prayer" is at the heart of any authentic religious vocation. whether monastic or (as the fictional 12th-century monk-detective Brother Cadfael might say) "in the world."

It was Merton's great gift to flourish in that monastic "atmosphere" in a way which intersected so powerfully with the Church "in the world." And so it was especially fitting that Pope Francis invoked Merton's wisdom (along with Abraham Lincoln, Martin Luther King, and Dorothy Day) when he addressed the U.S. Congress in September 2015.

Last year, while in Louisville for a meeting, I visited the historical marker (photo) commemorating a major moment in Merton's life. On March 18, 1958, at what was then the downtown Louisville corner of 4th and Walnut, Merton suddenly realized that no one could be totally alien to him. It was, he said “as if waking from a dream.” Suddenly, he realized that he could have no “more glorious destiny” than as “a member of the human race … since the Word was made flesh and became, too, a member of the Human Race!”