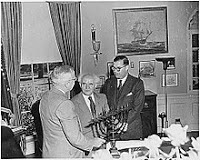 Chanukah, which begins Sunday night, was certainly the first Jewish holiday of which I became aware. Back in the fall of 1953, I attended first grade in our local public school, P.S. 91. We learned manners and how to behave respectfully towards our elders and those in authority, had regular fire drills, and had monthly birthday parties. And in December we "lit" chalk Chanukah candles on the blackboard. (Obviously, that was before the tyranny of secularism tightened its grip on public education, thanks to various malicious Supreme Court decisions and other damage).

A good decade and a half later, in the late 1960s, one of my politically radical friends told me how his East European immigrant parents had been Socialists and religiously non-observant, with the one exception of Chanukah, which they celebrated since they considered it to be a "people's holiday." For all its popularity, Chanukah is technically a minor Jewish holiday, based not in the Torah but on later events in Jewish history. Those events are recounted in the two Books of Maccabees, which, while not included in the contemporary Jewish canon of scripture, thankfully remain very much a part of in the Catholic one, thus giving us access to the inspiring story of Jewish resistance to imperial efforts to forcibly secularize the people of Israel.


In the bible, the two books of Maccabees recount how, in the 2nd century B.C., Israel came under the rule of the Syrian-Greek Seleucids, who outlawed Jewish practices and attempted forcefully to Hellenize the Jewish people – and how, an army of faithful Jews, led by Judas Maccabeus of the priestly Hasmonean dynasty defeated the Gentiles, reconquered the Jerusalem Temple which the Gentiles had desecrated, and festively rededicated it for sacrificial worship on the 25th of Kislev (December 14, 164 B.C.) The festival of Chanukah was then instituted to commemorate these events. 1 Maccabees 4:36-59 tells the story of the rededication of the Temple, ending with the decision to celebrate an 8-day Dedication Festival each year. 2 Maccabees 10:1-8 repeats the story and adds the idea of the 8-day fall Feast of Booths (Sukkot) as a model for Chanukah. I

The two books of Maccabees recount the sad story of the suffering inflicted upon the people of Israel by their secularizing persecutors and the heroic history of resistance by a minority of Jews led by the Maccabees. Although the Maccabees were, in fact, priests, and the holiday commemorates the rededication of the holy Temple, it is easy to see how 19th and 20th-century Socialists might have re-interpreted it as primarily a "people's holiday" rather than a religious one, and even more so how their post-independence descendants might interpret it as a primarily patriotic holiday, since it represented the last Jewish military victory and experience of national independence until the modern era.

Jewish tradition amplifies the biblical account with the story of how, when they sought to light the Temple's the seven-branch candelabrum (menorah), they found just a one-day supply of olive oil that had escaped contamination by the Greeks. Miraculously, that one-day supply burned for eight days, until new oil could be prepared under ritually pure conditions.

So Chanukah commemorates not only - or even primarily - the actual military conflict and eventual victory nor the subsequent Hasmonean empire (the last sustained experience of Jewish independence until 1948) but rather the rededication of the Temple (after its sacrilegious profanation by the Gentiles) and the great miracle of how the surviving one-day supply of Temple oil lasted for eight full days. Accordingly, the holiday is notably celebrated by the daily lighting of the Chanukah menorah, by eating food fried in oil (particularly potato pancakes - latkes), and playing dreidel.

It is not clear how Chanukah was celebrated in Jesus' time, but Jesus and his contemporaries certainly celebrated it. The Gospel of John - the New Testament book most attuned to the Jewish liturgical calendar - specifically says that Jesus was in Jerusalem, in winter, for the festival of the Dedication (John 10:22-23). It was during that celebration of this annual Festival of the Dedication that Jesus gave his famous "Good Shepherd" discourse.  Unlike Easter and Pentecost, which are explicitly connected with their Old Testament antecedents, Chanukah has no precise Christian analogue. And, unlike the greater Jewish festivals, Chanukah imagery plays no real role in the New Testament's presentation and interpretation of Jesus' life, death, and resurrection. But, occurring in December, it has inevitably evolved into a Jewish alternative to Christmas - as well as functioning, like Christmas, as an authentic winter light festival. As an alternative to winter's darkness, Chanukah can comfortably accompany Christmas as a winter holiday for post-modern secular society, a contemporary pagan Saturnalia of lights and gift-giving. Although, the contemporary association of Christmas and Chanukah as both gift-giving holidays probably owes more to commercial considerations than to any historic or religious parallelism, still, were it not for the contemporary commercial association of Chanukah with Christmas, it is likely that many of us Gentiles might never learn about Chanukah.
It is certainly a very good thing that we do get to hear about this beautiful "people's holiday," rooted in Israel's struggle against a secularizing political establishment, which celebrates God's miraculously abiding presence among his people. And, like the Christian (as opposed to the commercial) Christmas, the religious Chanukah holiday highlights a powerful message - in Chanukah's case, a message about faithfulness to religious law and tradition, the bulwarks of society, the cornerstone of which is authentic faithful worship in spirit and truth.


With the reestablishment of an independent Jewish state in the land of the covenant in 1948 and the restoration of Jewish access to the Wester Wall in 1967, Chanukah has fittingly taken on added significance as a celebration of the renewed presence of God's People in the Holy Land.