The Communion of Saints 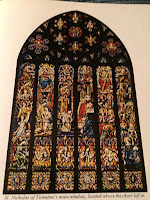 For one thing, church would certainly be a duller place! Just look around! Over there is the martyr Saint George in his knightly armor ready to slay a dragon for Jesus. Across the aisle is another ancient martyr, the Egyptian philosopher Saint Catherine of Alexandria.  At this end stands Saint Bridget, a 14th-century Swedish princess, a mystic who became co-patroness of Europe, a wife and mother of 8 children who became a nun and founded an order of nuns (who nowadays even have an Anglican branch). Farther down stands Saint Patrick the great missionary Bishop and Apostle of Ireland, who obeyed Jesus’ command to go and make disciples, even if that meant going outside the boundaries of the Roman Empire. And across the aisle is another bishop, whose name we don’t even know. My guess is that the glass with his name must have been broken at some point, rendering him forever anonymous – a fitting surrogate for all those saints we especially remember today whose names are known to God alone.

The communion of saints transcends time, uniting past and present. It permeates the Church’s worship and punctuates the Church’s calendar with its many feasts and memorials of saints, culminating today in this great annual celebration in honor of all the Saints – not just the thousands of saints officially recognized by the Church, but all the holy men and women, known and unknown, who have already attained the goal for which we here on earth still strive. Living now forever with God and praising him forever in heaven, the saints help us by interceding on our behalf, uniting their prayers with ours, imitating Jesus himself, our Risen Lord who lives forever to intercede for us [Hebrews 7:24-25].

The regular reference to and invocation of the angels and the saints, not just today but in every Mass, signifies our communion, as the struggling Church on earth, with the triumphant Church in heaven, and reminds us that the Church’s mission in this world is to mirror (however imperfectly) that heavenly community of angels and saints, and so transform the world according to the hope that is Jesus Christ’s great gift to his Church and the Church’s gift to the world.

As one of the seasonal turning points in the pagan calendar, November 1 was the beginning not only of winter but of a new year, the eve of which was a frightening in-between time when the spirits of the dead were thought to roam about and try to haunt their old homes.  Bonfires and jack-o-lanterns (originally carved out of turnips) were part of the defense of the living against assaults from the other world. The celebration of all the Saints on November 1 represented the Christianization of that old pagan holiday - a celebration of Christianity’s triumph over paganism and of Christ’s victory (as exemplified in the saints) over the demonic forces, which had hitherto held people in fear.

For this reason, as a sequel to All Saints’ Day, tomorrow the Church celebrates All Souls’ Day. We pray that all who have died in God’s grace and are now being purified from the consequences of their sins may be admitted to the fullness of his kingdom – there to join the saints already in glory. Our prayers to the saints to intercede on our behalf, together our own intercessory prayers for one another and on behalf of the faithful departed, express our ongoing participation in that great eternal community in which hope is fulfilled in love and sin succumbs forever to forgiveness.

Photo: The Communion of Saints - Saint Nicholas of Tolentine Church, Bronx, NY, Main Window, Depicting the Saint's Intercession at Mass for the Souls in Purgatory.