Ruler of the Kings of the Earth 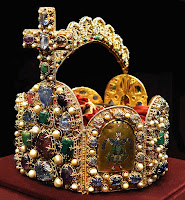 It’s almost the end of November. Thanksgiving has come and gone, and there is no mistaking what comes next in our commercial calendar. Christmas is coming! And yet the Church chooses this Sunday to tell us not about Santa Claus coming to town but about Daniel’s apocalyptic vision [Daniel 7:13-14] of one like a Son of man coming on the clouds of heaven who received dominion, glory, and kingship - an everlasting dominion that shall not be taken away, a kingship that shall not be destroyed.

Words like dominion, glory, and kingship are grand words. They suggest great things of epic proportions. They invoke the majestic splendor associated with a royal coronation. Indeed, if one didn’t know better, the Thanksgiving and Christmas-themed parades so many cities see at this time of year might easily be interpreted as some sort of royal occasion, with Santa Claus coming to town as king. Daniel, however, seems to have had something more like the real thing in mind.

In the case of real royalty, the point is that a particular person (whose whole identity is connected with this role) symbolically unites a community by a powerful personal bond – a bond so powerful precisely because so personal, a bond so personal that, through all of human history few, if any, civic symbols have served so successfully at building and bonding and unifying communities as has the institution of kingship.

And so today, at this pivotal turning-point in the Church’s annual seasonal cycle, we celebrate the powerful, personal bond we share in and with Jesus Christ, who is our King with all the symbolic splendor and rhetorical power that the word king conveys - and not just our king but “king of the universe.”

Christ the King reigns in human hearts, wrote Pope Pius XI who founded this feast in 1925, “because he is very truth, and it is from him that truth must be obediently received by all.” But truth can be an incredibly inconvenient and even threatening concept in a world which sees no need for it, a world which has no desire for it, a world which wants to construct its own reality. It was clearly so for Pilate  [John 18:33b-37], who responded to Jesus’ claim about his kingship by dismissively asking, “What is truth?” Pilate clearly could not imagine that such a question could actually have a real answer. Nor should we pretend that the world has made much progress on this score since Pilate’s time.

It is in the nature of political office to involve power over others. The more exalted the office, the more power over ever more others, culminating in the sort of sovereign power Pilate had in mind when he worried whether Jesus’ Kingship represented a threat to the imperial power Pilate represented. Jesus’ sovereignty, however, is different. Whereas worldly rule inherently involves the exercise of power over others, Jesus’ royal rule represents power for others. Jesus Christ is the faithful witness, the first born of the dead and ruler of the kings of the earth … who loves us and has freed us from our sins by his blood  [Revelation 1:5-8] . Notice, the book of Revelation says his blood, not the blood of his rivals or his competitors or his enemies, but his own blood.

As Jesus pointed out to Pilate, precisely unlike an ordinary worldly ruler Christ the King had no followers to fight for him. Jesus’ kingship creates a community that cannot be defined in Pilate’s terms. Worldly politics concerns itself with all sorts of very important things, things it’s important for us to care about; but worldly politics per se has no transcendent significance. The kingdom of Christ the King alone has such transcendent significance. Hence Jesus answered Pilate: “My kingdom does not belong to this world.” Even so, it did (and does) make a difference to this world. It did (and does) present a real threat, although not in the way Pilate had presumed. The threat, as Jesus himself identified it, is the truth. “I came into this world to testify to the truth. Everyone who belongs to the truth listens to my voice.”

When today’s reading from the Book of Revelation refers to us – to the whole Church - as a kingdom of priests, that’s a reference back to the people of Israel, to whom God had said at Mount Sinai: You shall be to me a kingdom of priests, a holy nation. That didn’t mean that all Israelites were transformed from farmers or shepherds or whatever into Temple priests offering sacrifices all day long. What it meant was that, as God’s Chosen People, the People of Israel would be the special link between God and the world, through whom (as promised to Abraham long ago) the whole world would find blessing. So, when the New Testament refers to the whole Church as a kingdom of priests, it’s telling us that all of us, together as his Church, have been put into a new relationship with God, which makes us the special vehicle through which the whole world will experience that blessing. As subjects of Christ the King, as citizens of his kingdom, we have become Christ’s word and voice in a world full of false and lying words, full of shrill and demagogic voices. In such a world, we may perhaps (as has been said so often) be the only word and voice of Christ that many will ever see or hear.

As if we needed to be reminded, events in the world in fact do keep reminding us  what and how strong the power of evil is in the world. But the presence of evil in our world and the evil misuse of human power – political power, military power, economic power, all kinds of human power – are not new and should not surprise us.

As subjects of Christ the King, as citizens of his kingdom, we like Jesus himself must testify to the truth in all aspects of life - witnessing to the truth in our relationships with one another and the wider world. To celebrate Christ’s kingship and to pray (as we do every day at Mass) for the coming of his kingdom, is to commit ourselves to the fullest extension of that kingdom to this world – so that this yearly celebration of Christ the King becomes not just an annual ritual marking the passing of the seasons, but the deepest expression of what we believe and who we hope to be and what we hope for our world.